The first was Uto.  The yard assured us that it lie only six hours to the south, but sailing into a headwind left us with a large stretch of open water to cross as dusk fell.  The harbor was not well marked, but we managed to spot it along the north coast. 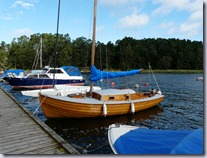 We slipped in, smoothly grounding in a muddy shallow along the main channel.  A fine start.  The village was tiny and exotically Swedish, a couple of small stores and scattered homes. A Norwegian Cruise Lines captain was on vacation on the boat, offering good advice.  Sadly, we hooked his extended stern line on the way out of the harbor, pulling a row of boats sideways into one another.   We could do better. 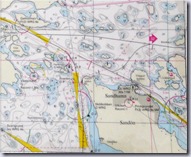 At the furthest eastern extreme from Stockholm, Sandhamn could be a frontier outpost if not for the opulent yacht club dominating the docks.

Mooring went nicely, we celebrated with steaks and showers. A seaplane landed, ferries arrived, the staff prepared for a weekend party.  Sadly, the jacketed commodore no longer fired the cannon at sunset.

There’s a wonderful pond hidden behind the far northern community of Findhamn.  If you can find the island, then the entrance, finally the docks, and all in a drenching rain as we had, then you get one of the most peaceful settings I know.  And the most beautiful sunset.

There are trails through the old farms to the tiny village, moss and ferns covering the granite boulders, marshes and diving  rocks along the shores.  We played cards and drank whisky late into the night.

Maps from the definitive guide,

don’t leave port without it… ‘