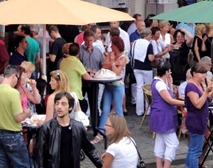 BBC Radio hosts a weekly segment during the Forum roundtable called “60-second Ideas to Change the World”.  Recently, Dutch-born author Ian Buruma proposed that everyone should learn Dutch as their first foreign language, worldwide, no exceptions.

His argument was that it has a rich literature, it is spoken by many people, and that nobody can take exception to learning it because the Netherlands is so small.

The panel debating the proposition suggested that there were other small, inoffensive countries (Ian noted that most alternatives don’t have as much to read), or that there were more useful languages (Hindi, Arabic, Chinese).

And, before you dismiss the idea entirely, watch UK Deputy PM Nick Clegg in action (around minute 1:40).  He has a Dutch mother, who he credits with giving him fluency, and a degree of skepticism about the entrenched class configurations in British society which helped guide him towards becoming a liberal. 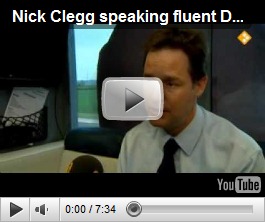 email
« Skadefesten 2010
Back across the Channel »
Radar Weather