Barrington’s town green is transformed this weekend.  There are dark, leaden clouds overhead, filling the blue skies and blocking the sunshine.  The bordering trees are getting a touch of color in their leaves.  The white cricket uniforms that dotted the field every weekend have been replaced by yellow and red football jerseys.

Autumn has arrived in East Anglia.

I could feel it driving the roads around Cambridge yesterday.  Merchandise has changed in the stores; pub signs have appeared reminding people to make their Christmas Party reservations.  Students again fill the narrow, twisting city streets, darkly bundled bicyclers pumping furiously up the hills, not quite leaving clouds of condensation behind them. 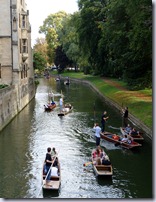 Ten years ago, fall was the time for clearing the yard, prepping kids for school, putting away vacation things, getting ready for cardiology meetings.  In the Netherlands, it was a bustle of activity: traffic swelled with people returning from holiday and offices hummed with purpose again.

I’ve been keeping an expatriate’s detachment this month: observing, photographing, noting the changes.  My heart is still in summer, even as my datebook fills with penciled appointments for October.  The shorter days and cooler nights are triggering long-form narrative dreams, complex stories involving friends and family.

Taken together, the dreams remind me of how my life has alternated, sometimes a committed part of a group, then stepping outside to start again.  My mind is sorting something out, I’m sure.

A cycle of joining and leaving, like the spring and autumn. fall and rise: return. I’ve been reflecting whether it has  to do with five years of being an expatriate, October 1.  With whether it’s a trait, a way of life, of just another skill?  With the implications to myself and those around me?  With life’s purpose, principles, and happiness.

I remember autumn reflections, raking leaves, were always, also a part of the changing seasons.