For the London Evening Standard, it was “Defiant Commuters beating the Tube strike.”  For me, it was squinting through jet lag to say “What do you mean ‘I can’t get to Piccadilly??”

The flight back to the Continent was great, I got bumped up because few fliers travel during the Labor Day weekend – seats that fold flat, decent food, wider movie selection.  The airlines can do it when they want to, they just choose not to for most people.  British customs, in contrast, was overwhelmed by the arrivals and it too 2 hours to get through the queue (while being reassured that “Tougher checks take more time”).

I got a bit of prep done before Tuesday’s meetings, an all-day training session starting at 10 in London.  The trains from Shepreth run every half hour, so I levered out of bed to catch the 7:32, arriving at 8:50.  Plenty of time, on any normal day.

However, transit through the King’s Cross station turned into a cascade of problems.  My phone vanished en-route.  My Oyster card failed at turnstyles.  The Piccadilly Line entry was gated and empty.  A transit worker advised me to go one stop north, backtrack to the south on a parallel line, exit at an adjacent stop, and head overland.  Tube carriages arrived bursting with people, we squeezed on like the old Japanese commuter pictures, riding compressed against walls and doors.

Nonetheless, I arrived at Leicester Square with a half hour to spare, and a lovely sunny day instead of the forecast downpour.  The training sessions turned out to be surprisingly useful, and I was out in time to go to the O2 store to get a replacement for my (fully-insured) phone.  The Oyster card turns out to conflict with the Cambridge card in the same wallet, a flip of the wrist solves the problem.  And there was a delightful new ‘ship in a bottle’ sculpture at Trafalgar Square to appreciate. 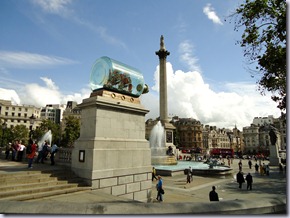 All in all, the world was set right again by supper, leaving jet lag as the only lingering issue.  And an early night’s sleep is still the best cure for that.