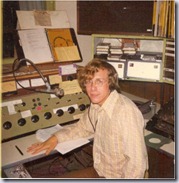 As a Vanderbilt Universtiy undergrad in 1972, I joined the campus radio station, WRVU, as a late night DJ.  Yes, that’s me, Dashing Dave, holding forth from the south tower of Neely Auditorium on the 10-watt powerhouse ‘Rock of Nashville’.

And, today, I got a note from the University asking how I felt about a proposal to sell the transmitter and broadcast spectrum, moving to an Internet-only format.

I feel…a bit weird about it all.

First, I’ve long believed that anyone who is still absorbed with their University teams and activities more than five years past their graduation needs to get a life.  Student activities exist for the students, not the alumni, and there’s no need to fossilize a radio station as a memorial to my formative experiences 40 years ago.  If the broadcast station no longer has relevance to, or interest from, the students, then it may be an anachronism that’s no longer needed.

At the same time, would the media board dump the student newspaper, the Hustler, and go to online format just because newspapers are dying?

The broadcast station never had a lot of listeners: that wasn’t it’s real value.  The signal was poked down into the public-service end of the FM spectrum, barely strong enough to cover the campus and surrounding neighborhood.  The student / educational value was in providing technical and management experience running a media outlet, getting an FCC license (credentials for a broadcasting career), learning the rules and etiquette of public media, and being a part of the broader Nashville radio station community.

The switch to Internet-only takes away those learning opportunities: I suppose that the real question is whether they are still relevant.

The University proposes to use the proceeds to “create an endowment to support innovative student media experiences, facilities and operations at Vanderbilt in perpetuity”.  I’m not sure what the educational mission of that is; it sounds like a concert fund.  And the wording sounds like they anticipate stiff alumni reaction to the proposal.

Already, the WRVU DJs group on Facebook is getting excited:  “WRVU may be up for sale!!! ONLY YOU CAN MAKE IT STOP!!”

I guess I’m a bit more sanguine.  If this is an asset that’s molding in the attic and losing value and student interest by the day, sure, sell it.  If it’s a fad to raise quick cash to hop the Social Media express, it’s probably ill-considered.

I feel….like it’s a long time ago but still an important part of me. I’m sad to see the station sold off and it makes me feel a little outdated along with it.