A University attracts Names, each seeking a public forum for their Ideas, creating a steady current of speakers through the lecture halls of Cambridge.  The schedule is published online and I’ve decided to make the most of the chance to stir my thoughts and challenge my mind.

So I arrived at Adaptive Networks and Bio-Inspired Cognition.

Prof Sayed, an engineer from UCLA, explained his interest in flocks and swarms, how starlings and fish flowed through space together.  Birds, for example, form characteristic V-shaped lines when migrating because each was able to

ride the pressure lift created by the bird’s wing in front of it.  This illustrated how order and complexity emerged from local interactions among members who each follow simple rules.

Researchers had long thought that the rule was ‘Gossip and Consensus”, each broadcasting information to their neighbors, and then changing behavior based on the average of what they hear from others.  It reminded me of the polder model.  But Dr. Sayed pointed out that it takes time to achieve consensus, and that a single solution was unlikely to be best for the majority of individuals.

Instead, he proposed a Diffuse and Process alternative, where individuals listen to their neighbors, then compare what they heard to what they already knew and believed before changing their behavior.  He showed several pleasing simulations of how this created more realistic flocks on his computer, foraging for food and avoiding predators.

It was interesting, but I suspect that he was only able to mimic behavior rather than truly explain it.  He also failed to address a lot of really interesting questions that he asked in his introduction: Why do birds form flocks while humans form crowds?  How often and how much do birds listen to their neighbors? Is movement a necessary part of the exchange of information?  Are flocks intentional? What about tipping points, where people follow the herd once it starts to move? 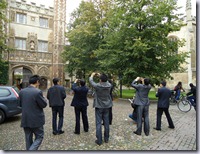 In any case, it gave me lots to think about, and I took a long walk through the city to mull it over.  And, passing Trinity College, I noticed behavior that makes me think maybe it’s not so uncommon in humans as we think.