There was a cold mist rising off the Maas this morning, drifting past my windows and between the piers of the St. Servatius bridge.  Students bundled tightly against the damp chill, hunched over pedals on their way to school.  I sipped a mug of coffee, warming and watching autumn arriving.

As the weather cools, the Dutch turn to warmer drinks.  Summer beer and fizzy prosecco are replaced by flavored coffees and ceramic spirits.  Winter espresso is often served with a twist of citrus and a small glass of liqueur after a meal, sometimes mixed with whipped cream.  The sprits are strong, sweet syrups that the Dutch call bitterje, loosely translated as a bitter, but different from the British / American definition as an ale / tonic.

Jenever is a clear gin-like drink, served ice-cold, that I first encountered as friends toasted an “Abraham” birthday. It has a distinct juniper scent and comes in two varieties: Oude and Jonge.  Unlike cheese, these ages refer to whether the drink is made in the old- or new-style. (Oude has more alcohol and less sugar).  Korenwijn, usually on the same shelf, has both more alcohol and more sugar, but is otherwise similar. 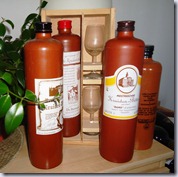 I prefer a Kruidenbitter: a thick brown drink, often made locally and served in special glasses from heavy ceramic bottles.  Our engineering director used to keep a bottle to celebrate promotions or project milestones: the bottle and class would be passed from person to person with each pouring a shot and taking a drink.  Its delightfully warming and soothing: I keep several bottles that were given to me by friends at holidays.

You may also encounter brandewjn (“roasted wine”: a grape brandy), citroenjenever (a yellow lemon-lime version of jenever), oranjebitter (reminds me of cointreau), and vieux (a Dutch cognac) are also likely to be encountered.  All are sipping drinks, with long tradition made regionally from old recipes.  If you can’t find them in local specialty stores, you can find them online.

The thermostat says that it’s 18C in the apartment, high by several degrees, perhaps indicating that the heating is broken.  I gave the system a test run and , gratifyingly, the radiators filled smoothly and the rooms warmed in an hour.  Heat, light, and internet: I’m ready for winter.