The fields and villages scrolled past the National Rail line, threads of mist still clinging to the grassy hills.  It’s starting to really feel like fall across Britain now.  Lines of trees glow yellow and orange against the blue morning sky; the BBC is predicting frost overnight.

The pivotal funding meeting a week ago had not gone as well as I hoped.  Everyone was discouraged, but we were trying to regroup. Over the weekend, we revised project timelines and budgets, answering each person’s questions.  Follow-up calls were scheduled this morning; I hoped that my failure to get to ‘yes’ wasn’t the same as a ‘no’.

I sighed, listened to podcasts, and looked for a bright spot.

A technical clip, a travel story, then Douglas E Welch with a few words of wisdom in the Career Opportunities podcast. “Reviewing your social media streams can give you a clear indication of how you are doing in your career and whether you might need to make some major changes.”  I winced. Only last week I’d scribbled “Dave did not have an easy time of things today.”  on Facebook.  ‘hope nothing bad went into Tweets.

Few lives are unrelentingly good or bad and your online life should reflect that. We all have bad days. That is OK. In fact, we can even make these bad days useful. Rather than simply ranting about your life, consider asking for help. Putting a productive spin on your “grumbly days” is a great way of rising above them. It also allows others to see that you are not just wallowing in your despair, but actively trying to find ways to make your life better, even in the midst of conflict.

I really started to think about this.  How I’d let this setback get the better of me, and how that played out in my on-line narrative.  More importantly, where was the balance: what would I write tonight?  I realized that it wasn’t  a question of “how could I do better?”, but that, as suggested, I needed to change perspective.

The fact is, free-market capitalism is absolutely brutal in challenging new ideas.  It makes me long for the days of patrons and guilds, love and respect, instead of the perseverance that it takes to get a new business going.

But I do believe that there is benefit in the criticism, and  logic behind what investors and customers want.  It feels adversarial but it’s a courtship process. 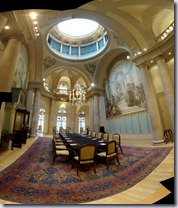 I mulled that for the next hour, finally entering the Accountant’s Hall (right)  with a positive attitude and a commitment to seeing things from their perspective.  And, an hour later, we were back in the race, with endorsements and a clear path to the next steps.  It’s not finished yet, but it’s definite progress.