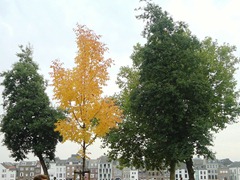 August/September was my longest trip away from the Netherlands since I moved here four years ago.  I hadn’t planned to be gone for more than a couple of weeks, but an opportunity, sudden time in someone’s schedule, a meeting, planning and training: one thing led to another, and time passed.

But the skills will all return by the weekend: it’s just like, well, riding a bike.

Two links of interest, then back to work on the budgets:

Schiphol Airport has long had a small art gallery, where passengers could browse paintings from the Rijksmuseum between flights.  No, next to that spot, they have put a library.  There are several thousand books that can be borrowed, most focused on Dutch history and Culture, and comfy chairs for reading.  It’s a great idea, and may pull me away from the airline lounges on future trips.

My mail updates are returning errors; I can’t Like my friend’s status.  Is it my fault or is the site down?  Downrightnow.com knows: it’s a free site that monitors the major social networking sites and keeps track of whether they are working.  The graphic history of up- and down-time suggests that the Cloud is far less perfect than we all think.

email
« Back among the Dutch
Doing my civic duties »
Radar Weather