The Great Recession has been hard on Maastricht as it has over much of the US and Western Europe.  There are a lot of storefronts for rent, a lot of ‘going out of business’ sales.  A venerable chocolate shop two doors up from my apartment closed in October; a stationary shop where I bought business supplies is also gone. 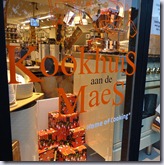 The Kookhuis aan de Maes is a high-end kitchen shop that appeared on Markt Square.  There’s a wide assortment of  apparatus, utensils, and accessories, mostly expensive high-end items that high-end amateurs would look for (if you’ve seen MasterChef on BBC, you have the right idea).  There are some clever novelty items, a timer that plays different tunes depending on how well cooked the pasta has gotten, and a ‘rubber duck’ tea infuser were particularly.  Overall, the prices are breathtaking (18 euro for the pasta timer), but the staff seems friendly and knowledgeable, and the shop was crowded.  The building used to hold a bank, and there’s still a safe-deposit vault downstairs, put to new uses. 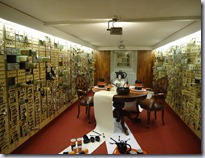 My building on Kesselskade was supposed to get a new pannekoeken restaurant, but construction stopped a month ago.  The chef moved over to Markt Square as well and has opened de Smaak next door to the Burger King.  Literally “Tasty” 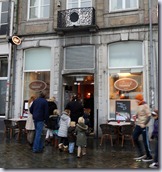 or “Savoury”, the restaurant serves a huge variety of traditional Dutch pancakes.  Pannekoeken are a cross between a crepe and a pancake, with either omelet-style fillings or dessert / fruit toppings.  Prices vary between 5 and 10 euro per dish, service is good, and there are lots of families and couples inside for a quick half-hour break.  The kitchen is open so you can see how they are made (inside the pan rather than on the outside like a crepe), and it’s a chance to experiment with Dutch syrups and sugars (sort of strange to a palate raised on maple syrups). 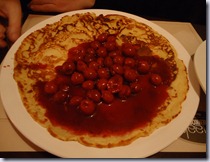 Disclaimer: My opinions are my own, and I was neither paid by nor invited by either establishment to write this critique.