I closed the apartment in Maastricht for the holidays and headed north, market lights behind and city lights ahead. A family friend discovered a free day between business appointments and we planned a day to see the Amsterdam; now the snow and rain ended leaving the happy prospect of sunshine for walking the city.  The flat green landscape blurred past the train windows, while Rick Steves reviewed highlights of the Netherlands through my earbuds.

It makes me smile: My everyday life still needs so much explaining and justifying to his audience.  And not even the politics and coffee-houses (with a ‘C’).  It’s the junk bicycles, the pronunciation of Keukenhof, the different culture in the south compare to the north of the Netherlands, the reason why calling the country ‘Holland’ is like calling the US ‘Texas’.  He never does get his lips around the keurken sound to the Gardens.

I slip between trains at Utrecht and on to the meeting at Schiphol.

There are still mysteries, of course: The Ovi ChipKaart for one.  When do I swipe the card?

Whenever you get on or off the train.

But, suppose I go from Maastricht to Eindhoven to pick up an immigration document, then return, swiping as I get on and off the train.  I’ve found that the short stay in Eindhoven prevents the card from registering two swipes, resulting in an excess 10 euro charge (refunded after the proper form is filled in and mailed to NS).

Or, today, I go from Maastricht to Amsterdam via Schiphol, to drop my bag in a locker, with a train change at Utrecht.  When do I swipe?  I assume Maastricht, twice at Schiphol (on and off), and again at Amsterdam.  But this gets me a red Error as I exit at the Central Station.

The information office initially advises that I don’t swipe if I’m getting off for less than an hour: that counts as a train change  Then a supervisor steps in and says that one must swipe on and off anytime you step off the most direct route. Otherwise, the conductor will see you are joyriding around the countryside and invoke a fine.

So, not at Utrecht; yes, twice, at Schiphol. 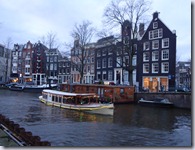 One way or another, I arrive in Amsterdam without incurring a 35 euro penalty and we’re off.  Rijsttafel isn’t available for lunch, so we dive into a very traditional Dutch restaurant, the Haesje Claes.  Excellent erwetensoep on a cold day, and abundant smoked salmon on the salad.  The stomppot was huge: I had the hotchpotch variant which doesn’t seem to be prevalent in the south.  Overall, very traditional and reasonably priced.

Then the Anne Frank house, difficult as always.  I struggle with the presence of the family that still pervades the dark little rooms, the tragic end to the desperate war years, her father’s dedication to publishing the diary and establishing the museum.  “Never destroy what you cannot create”, physicist Leo Szilard once admonished.  It is so easy for thuggish regimes to thoughtlessly extinguish fragile insight and creativity.

We took a long roundabout walk through the gathering twilight to enjoy the canals, stopping at the Houseboat Museum.  This was a new one for me, not a huge attraction, but a nice little exploration tucked in along the way.  The interior was surprisingly roomy, I expected something more like a British narrowboat, but this was wide and low, with generous center space and fixtures and furnishing gathered along the walls.  I had offered to rent a houseboat when corporate first moved me over, but my relocation agent was horrified that I should find better digs, so I never pursued it.  Now I can see that it might have worked. 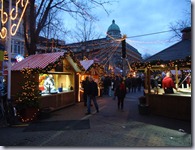 Amsterdam has it’s own mini-Market in place, tiny compared to the ones in the south but with a good sausage pavilion and an ice rink.  We sampled an oliebollen and looked for gluhwijn (not to be found) before walking back to the station.

It was the sort of casual exploration that (I think) gives a better sense of the city and some chance to encounter it’s people and history.  And hearing US perspectives on my everyday things leads easily to an anecdote about daily life in the Netherlands or to an insight about how life differs between the cultures.

Rick Steves may have had a better tour to recommend, but this was a fine afternoon’s break for us both.

…and I’ve probably figured out the train passes before him.

email
« The Aachen Market
Munch in the Kunsthal »
Radar Weather