I like Schiphol Airport in Amsterdam a lot: it’s bright and cheerful, and people flow through the facility from door to gate with reasonable efficiency. The departure areas on the upper level are arranged like a chevron: two glass terminal blocks at an angle to one another, connected by a long, curving tunnel.

Now imagine a lone extending from one end of that departure area to the other: ten people abreast, a hundred in your vicinity, more than a thousand waiting patiently  It roughly follows the red line across the bottom the picture below.

Now, imagiene that hour by hour, the massive queue inches forward, but the clocks are moving much, much faster.

I arrived back at the airport about 2:30 to check in for my 5:30 flight: usually this is a pretty quick process through the frequent flier queues.  The KLM area was walled off from the rest of the airport – that happens occasionally when there are crowds or security alerts, and usually means that the police are admitting people slowly through the front doors.

This time however, all the front doors were blocked, and airport police were waving people to the other terminal.  Even there, only one entrance was open.  Through the windows, I could see a wall of people the entire length of the airport.

Everyone was directed to the end of the line, and then we stood.  The departure board showed delays all over, all flights to Heathrow and a few to Frankfurt cancelled.  A sudden snowstorm had buried the airport and the nearby M25: it seemed likely that the system was disrupted as a result.  My flight to Vancouver was already delayed by an hour to 6:30, so I settled in to wait. 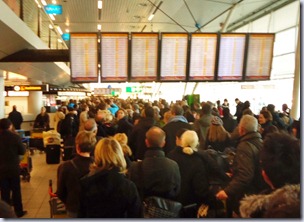 By 5:00, I had only moved the length of that first terminal.

John Dickerson wrote a piece in Slate about how people respond to airport delays. In his taxonomy, I am an ‘Outside Flight Ninja’, one who immediately starts calling and plotting routes around the problem. These people walk away from other travelers so their solution won’t be copied. They know the tricks of the major airports and departure times of alternate flights by heart.

First goal: get out of the line.  KLM had sent a few agents, flanked by police, to try to round up folks whose flight was departing within an hour.  I found a harried one who didn’t realize my 5:30 flight had been bumped to 6:30 and got waved through the tunnel.  A long line of sullen travelers glared on the left; airport officials and police dotted the corridor opened for those with a chance of escape.

The KLM desks were clogged: understaffed and crowded.  Half the desks had agents, and half of them were trying to rebook people who had already missed flights.  This cascaded to causing the rest of the line to miss flights.  I hopped between a few queues, gauging progress.  A quick call to the airline: the flight was now delayed until 7:00.  If I could get to the desk by 6, I would make it.

Time to start negotiating: Are you all together?  What time are your flights leaving?  Except for one fellow whose fliht was leaving in ten minutes and was already doomed, I had the earliest.  I worked my way up the queue, the person at the desk who I’d thought was one-bag / ready-to-go turned out to need a rebooking. The agent picked up the phone, the line groaned.

She cleared the desk at 5:55 and I was in….and out in two minutes.  I thanked people warmly, and scooted to the gate.  No lines at immigration;  a short jog down the concourse.  The flight left early; I boarded with 5 minutes until closing.

3000 people were stranded at Schiphol on Saturday night.  The brought out camp beds and maybe 500 stayed over in the airport itself.  I feel a little guilty at Ninja’ing my way out, but nobody would have been helped if I hadn’t.

KLM could have helped with just a few changes to procedure:

On the plus side, the Dutch crowd was astonishingly well behaved, quiet, orderly, patient.  The police kept a low presence mainly aimed at being reassuring and stopping people from cutting in line.  And the gate people managed late arrivals onto the planes very efficiently.

I’m reading Clutch, how to get things right under pressure:  Author Paul Sullivan claims that success depends on having five key personality attributes: Focus, Discipline, Adaptability, Being present (and blocking out everything else), and Using fear and desire to drive for success.

In hindsight, my experience seems to ratify these principles.

I know several expats who have the Big Five, but who failed to cope with the occasional challenges of pressure situations and ultimately quit their overseas assignments. I’ll have to think on whether expat success requires both sets of competencies aspects in your repertoire, rather than just one.

email
« Snow along the canals
Reflecting on ancestry »
Radar Weather