Places look the way that people who see them feel.  — Ian Frazier, Travels in Siberia

Despite the technical limitations of his day, symbolist painter Paul Gauguin was a man on the move.  First living in France, then Denmark, and finally living as an expatriate in Tahiti. he was outspoken, insightful, and chronically short of money.  But he found, among the natives, the primitive subjects and colorful inspiration that stimulated many of his best works.

For the first time in 50 years, these works are gathered at the Tate Modern in London in a retrospective exhibition that captures the moods and passions of this unique artist.

The exhibit contains many of his best works, gathered into eleven themed rooms including Rural Narrative and Eternal Feminine.  A couple of my favorite works (below)  are missing, unfortunately, including “Young Girl with Fox” ( a meditation on virginity) and “Where do we come from?” ( a reflection on feminine life). 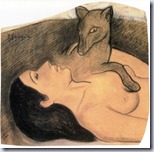 But most of his other well-known works are present, along with carvings and the entrance to his longhouse.  Letters and photographs from the period are included to give context, and the exhibit gives a very complete picture of his life and works.

Unlike Munch, Gauguin painted in much the same style throughout his life.  The works don’t show as much technical finesse, but his primitive themes are evocative (and show a much more comfortable relationship with women), while the colors are much more vivid when seeing the actual paintings up close.

We spent a couple of hours walking the gallery, then retired to Roast, a restaurant in nearby Borough Market, to sort out impressions.  I’ve long enjoyed his style and backstory, and this is a unique chance to get a comprehensive view of the artist. 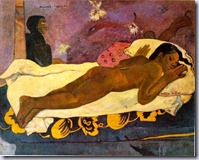 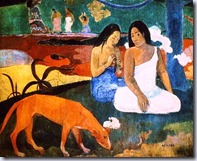 More works are available in my Paul Gauguin library or on Wikipedia.

Gauguin: Maker of Myth is on exhibit at the Tate Modern through January 16 2011.