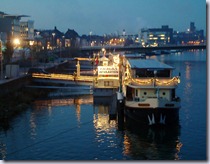 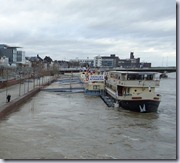 The river continued to rise last night: no danger of it spilling over it’s banks, but the noise and the spray through the St. Servatius Bridge are even more impressive today.  The river is noticeably wider, with spillover areas filling, ponds joining the river, and estuaries backing up.  It’s all a pretty impressive demonstration of water management, something that the Dutch excel at like no others. 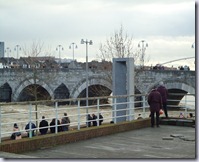 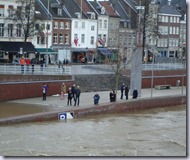 Still, people are coming down to line the bridge and the banks and to study it for themselves (above).  In part, I think that this is just natural curiosity during a rare and impressive event.  But part of me still believes that the Dutch still like to check on things for themselves when it comes to water.

Shipping seems to have stopped; I doubt that the barges and tankers can get under the bridges any more.  A Belgian LPG tanker discovered this (almost) too late.  He swerved across the river, belching smoke and spray, less than 100 m from the Stone Bridge on Friday – he is still tied up at a tour boat pier east of town.

I’m curious what is happening at the locks up by the Albert Canal: are they open, closed, slightly ajar to relieve the pressure.  It may be worth a ride up tomorrow to see what it looks like.  In the meantime, the apartment sounds like the beachfront rather than the riverfront: a roar of water like waves on the beach as the snowpack makes its way to the Channel. 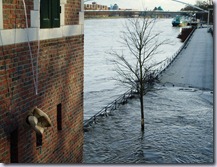 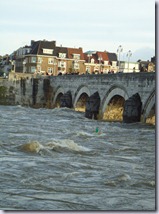 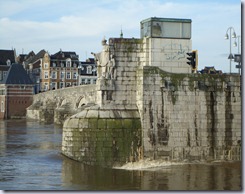 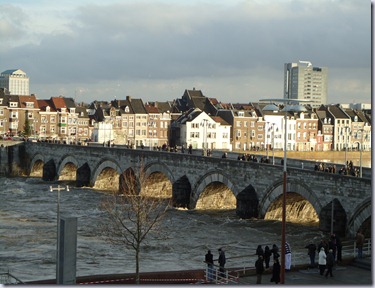