What is a creative act?  Is it, hypothetically, the act of bringing something into existence that wasn’t there previously?

1) I decided to try to make biscuits this morning (Boy Scout nostalgia leavened with MasterChef  ambition).

The Internet delivered a suitable recipe for flaky professional rolls; I picked up the requisite buttermilk (karnemelk), flour, and butter.

Some steps were difficult without a pastry cutter, and I had to hope that self-rising flour would compensate for my lack of baking powder and baking soda.  The dough folded and cut nicely, though, and looked good during the baking.  I was pleased with the result, cooked through and warmly risen.

2)  I’m working on a simulator to demonstrate some algorithms that compute heart rate automatically from the ECG. 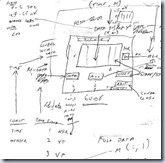 I sketched a few ideas on paper and worked through the user interactions and the underlying data structures.  MATLAB has a tool for building graphical interfaces, YouTube has tutorials that explain the process, and there were a few examples and some data that I could download off PhysioNet, an open-source repository.

I took it one step at a time, assuring that each part was working properly before going on to the next.  Figuring out how to scroll the ECG in an embedded window was difficult, and getting the controls linked to code was tricky.  But I worked through the bugs and complications and had a nicely working demo by the end of the weekend. 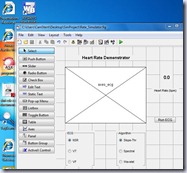 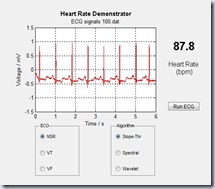 Okay, so which is the creative project?

In both cases, something was created that wasn’t there before.  Both took planning, collecting materials, development of skill, and satisfying a vision of the end product.  Arguably, programming is harder knowledge, but cooking is the more adaptive process., but are both equally creative?

I was pondering this today, and got to thinking about artistic creativity as a guide.

Artistic works are almost invariably preceded by some sort of a sketch.  It may be a charcoal drawing, storyboard, fragment of a refrain, or a character profile, but there is always work on the background and components before the finished work is attempted.

That suggests that creative thinking and planning before starting may distinguish the truly creative works from the simply generative ones.  By that measure, my programming qualifies and my biscuits don’t.

And there’s no doubt that cooking can also be creative. There are many chefs who know flavors and textures, techniques and ingredients, who also design new dishes based on small tests and deep experience.  I just wasn’t amon them (and the jury is still out on MasterChef).