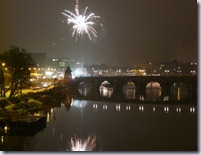 The fireworks finally fell silent about one in the morning.

The display had been as noisy as ever, but low-hanging fog obscured the delicate tendrils of the myriad explosions against the night sky. Instead, intermittent red and white glows silhouetted the buildings while smoke enshrouded the bridges.  In a neighbor’s garage, we sipped champagne and apple slices cooked in poffertje batter, plotting the delights of the coming year. 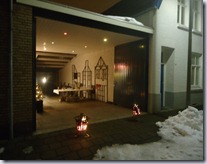 I poked a nose out from under the covers at 11 this morning, a victim of equal parts indulgence and jet lag.

The weather, warming, had dissipated the fog and was melting the snow.  The streets were largely empty and stores were shuttered; the bars served coffee while the vendors pushed oliebollen. I’m not sure that koffie-bollen offers any palliative hope, more likely it only accentuated my need to spend serious time in the gym starting Monday.

A sign in Vrouweplein pointed to an open exhibit in the basilica, a life-sized nativity winding around the stone corridors.  It’s very

impressive: the Driekoningenstoet holds life-sized dioramas of everyday Bethlehem highlighting bits of the Christmas story.  In contrast to the nativity scenes filling churches in the US, this one had 1) figures with Middle-eastern appearance, rather than bearded and Anglicized ones, 2) a conspicuous lack of heralding angels, and 3) a complete absence of motorized embellishment.  The result is very pleasing, and, although it ends in Maastricht tomorrow, it’s certainly a worthwhile family outing at future Christmas’s. 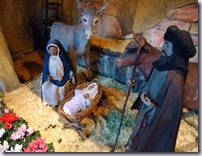 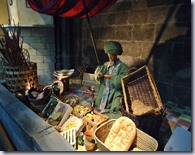 This anticipates celebrations culminating in a street parade on January 2, in which kings, shepherds, sheep, horses (and a camel) hold the Epiphany Procession.  This ends at back at the Onze Lieve Vrouwebasiliek (Basilica of Our Lady), where the kings (and children dressed as kings) offer gifts to Mary and Jesus.