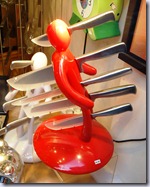 In medieval times, people would throw salt over their shoulder for luck.  The left shoulder is the correct one, in part because people are generally right handed, but in main because the devil always sneaks up on you from the sinistral side of the body.  Best to simply hit him with a handful in the eye to ward off evil.

A few old nemesis similarly need exorcism, so a friend and I opened a window and a bottle of prosecco, airing our 2010 demons out of our lives.

Other bogeymen, KPN, T-Mobile, and VGZ, have been very well behaved the past months, processing payments and delivering services with little fuss.  So, it’s a good start to the new year to let go of the old battles and start the new year fresh.

Along with exercise, diet, more sleep, less stress, and a clean agenda.  And a pinch of salt, tossed against the clear Dutch sky for luck.

email
« Back across the Channel
Are there really little unseen bits? »
Radar Weather