I’m convinced that no business deal closes until each of the participants exhibit all of the seven deadly sins.    Wrath, greed, sloth, pride, lust, envy all make an appearance; it usually takes an expensive dinner with fine wine (gluttony) to hammer out the final details.

Bad behavior usually manifests as co-mingled pronouncements of what is ‘right’ and what is ‘fair’.  Making sense of a negotiation requires pulling them back apart: they aren’t the same things.

What’s “right” is to conform to justice, law, or morality in individual actions.  Thus, when my landlord arrives to request back electricity payments that were my responsibility in the lease, he is right.

However, when he asks a penalty because the realtor failed to set up the auto-debit, or for payments going back to February on the basis that the apartment wasn’t used until I arrived in May, it fails to be “fair”: free from favoritism, self-interest, bias or deception.  Fairness involves the relative advantage between people; whether everyone is treated equally or proportionately.

Interestingly, a new client interviewed me today and put the issue into a different light:  If you are dealing with academics, you know that there are times when you’ll need to be flexible and open, and times that you’ll need to be firm and decisive.  Can you describe a situation appropriate for each?

I would be flexible on issues of fairness: what are the goals, how should they be accomplished, who does what, and how long will it take?

But I’d remain firm on issues of policy: what are the rules and how are they administered.  Firm on allocation of resources: when there is limited time or money, everyone can’t have everything.  And form on accountability: folks need to do what they say they will.

It gets tricky, or course, in cross-cultural settings where differing traditions of truth and morality muddy what’s perceived to be right; where fairness may not respect gender or age.  In fact, the interviewer followed up on exactly this point: how would you behave among the Dutch.  I fell back onto the old saw that I’d seek consensus, be consistent and transparent, and communicate, communicate, communicate.

I’ll see if I get the commission.

Of course, if I’d had more time, I’d have realized that the rational approach may work better with academics… 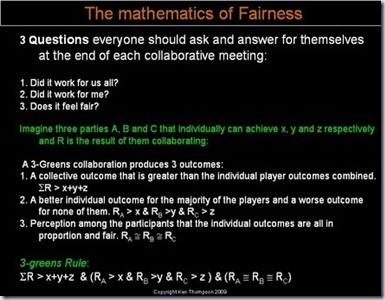