A blustery day in Cambridge: the wind has rattled the roof for two nights straight, and occasional sprays of rain spatter over the windows.

The biscuits failed to rise this morning, a combination of unfamiliar buttermilk (thicker in the UK than the Netherlands) and a lack of measuring cups.  The resulting batter, too moist by half,colonized the kitchen as I tried to add flour and work it to something sensible.  A fine white dust settled over the floor and counters, pole dough stuck to handles and dripped from counters.  The result was more like scones than flakey risen biscuits: tasty but solid.

I’ve retreated to listen to the radio (inexplicably, big-band swing on the BBC – feels like I’m in a time warp) and catch up on some reading.  And it’s there that I sound some statistics from The Economist that put the two charts, above, into perspective.

So, the question is, “What US state has the same size economy and populations as the Netherlands?” 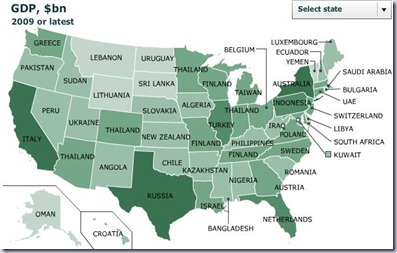 The answer, at around 750 billion dollars annually, is Florida.  Interestingly, Florida’s population is also about 18 million, similar to the Netherlands (16.5 million), so the GDP per head works out somewhat the same as well.

Now if only the weather were equivalent.

email
« Moving the business into Year 2.
Expats and the job market »
Radar Weather