I’ve been following developments in Wisconsin’s labor law dispute, where the  governor is attempting to eliminate collective bargaining for state employees.  The Democrats in the legislature have fled to prevent a vote on the issue; Republicans have passed it without them using a procedural loophole.  Gov. Walker promises to sign the measure quickly.

I have been vocal in my criticism of these developments, and have heard from friends asking whether I’m expressing  simple  anti-Republican bias.  Fair enough: I’m admittedly no fan of the party.

First, both parties are engaging in parliamentary maneuvers instead of negotiation to pass major legislation.  The culture wars began in earnest when policy began to be set unilaterally by courts and legislative majorities without regard for minority views.  We now see endless tit-for-tat excesses that are just raw power-politics.  It was wrong for the Democrats to do it with Health Care Reform; it’s wrong for Republicans to do it with Labor Reform.

The second is the war on labor unions themselves.  Business stands on ‘three legs’, customers, employees, and shareholders; their competing interests and perspectives create cooperation and tensions that ensure the proper functioning of free-market systems.  Dominance by any one element leads to excess; personal enrichment substitutes for responsible growth. Work unions are a necessary check and balance on corporate governance. 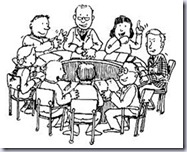 The root of this belief  is my experience with the balanced system that I’ve seen work in the Netherlands.  Briefly, there is a system of trade unions that set collective bargaining guidelines at a national level, and company-level ‘works councils’ which negotiate specific pay packages, working conditions, and layoff policies.  These national co-determination structures fit within the EU Works Councils directives, mandating labor representation and participation for company above a threshold size or with transnational operations.

In our company, the Works Council (Ondernemingsraad) was elected yearly by the employees, and they met with the General Manager periodically – they did not attend General Management or Board meetings.   They relayed information between management and employees, participated in policy discussions regarding business strategy, and resolved workplace issues (memorably, allocation of parking and safety for women walking to the satellite lot).

When the division was closed, but Works Council was notified, and these folks, all ordinary employees, took on all of the negotiations for severance and retirement packages, for synthesizing and communicating worker concerns, and for organizing support and outplacement networks.  They were advised but not directed by trade unions.  I was really impressed with the way that they organized meetings, resolved issues, and negotiated on behalf of the workers: they were known and trusted in return.  In the end, they secured a good settlement that enabled people to go on to rebuild their professional lives.

The US and UK do not have company-level councils, preferring national, centralized trade unions.  As a result, they don’t share an interest in the success of local businesses, can’t address company-level issues, and fail to be known and trusted by management as well as workers.  They become prone to self-protective excess and defensive, heavy-handed policies, leading to a loss of influence and declining membership.

I’ve always been a believer in human scale organizations and local governance, and like what I’ve seen in the effectiveness of works councils that adhere to these principles.  I believe that workers are partners in business, and should have their interests represented and  their voices heard.  I see the policies promoted in Wisconsin as dangerously unbalancing that partnership, closely allied with right-wing anti-union rhetoric, so my 140-character tweets tend to focus on those events, missing the nuance.

A good background document is here.