The real biggest issue that faces America today is that America, despite a recovering economy, is broke, dispirited, bamboozled and petrified.

Keeping up with local media (generally British but increasingly Dutch as well) means being exposed to local Op-Ed (Opinion and Editorial) pieces.  Like in the US, most comment on local issues and personalities and, like most in the US, they lean hard into whatever argument they are making.  The hyperbole may be more literate in Britain, but it is no less overreaching

On Monday, Standard & Poors, a US credit rating agency, issued a negative outlook on US government debt that was widely seen as a threat to downgrade the country’s credit rating within a year.  The rising deficit and repeated failures to cut spending prompted the warning, cautious souls hoped that it would constructively focus the difficult debates in Congress.

The event was an opportunity for deficit- and bailout-weary Europeans to aim at US policies, widely blamed for triggering the financial mess and manipulating national credit ratings.  Mr. Norman’s editorial is one of the most outspoken.

When George W Bush was elected President by five of the nine Supreme Court justices, he took on a country swimming in cash and basking in its post-Cold War hegemony. Eight years later, despite the healthy surplus Bill Clinton left him and a barely broken economic boom, he had doubled the deficit by wasting trillions on imbecile wars and trillions more on tax breaks for the wealthy … The America at which we glance across the ocean today is shrinking before our eyes. 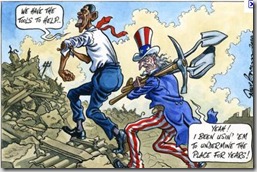 Like the grotesque weekend editorial cartoons, dripping with blood and distortions, these editorials do more than comment.  They provoke.  And while I agree with the point of the argument, the thrust is too broad and the bin Laden characterization is irrelevant.

Yet, this is how we are depicted; it may be how we are perceived.  It creates difficult dilemmas for me as an expat: my tendency is to acknowledge what’s wrong and point to the innate common sense and goodness of our people as evidence  that things will be set right.  But, by conceding some points, do I concede all  of them?

Is the alternative to say that the worst errors discredit the rest of the narrative?  The US sacrificed her moral authority to impose the Pax Americana on the satanic altar of Dick Cheney’s neo-con experiment.   But I can’t argue the opposite excess, that Bush was good for America.

Do I chalk it up to free speech and ignore it?  I wouldn’t among friends in Seattle.

The psychological impact is immense. Imagine the blow to any residual faith America had in its exceptionalism and supremacy. Imagine the shock, not to mention the awe, to find itself, within 10 years of being vaunted as the planet’s hyperpower, at being styled a potential debt-welsher on Graeco-Portuguese lines.

Its almost a parody of the daily rhetoric on Rush/Fox.  I do have a tin ear for understanding British irony, and this may never have been meant literally.  But it’s still a troubling insect to find amongst the basket of breads that I enjoy with the morning paper.