It’s a week before Easter which, in Catholic Limburg, is observed as a cross between an Easter celebration (pasen) and a Spring celebration (variously lente or voorjaar).  The shop windows are filling with candies, bunnies, and chickies – there’s probably a logic that if you celebrate Carnivale and Lent, then Easter is part of the bargain.  As in the US, the public observance is secular and focused on flowers and baskets. I wandered through a couple of the larger churches to see if they were gearing up, but didn’t find much decoration, though. 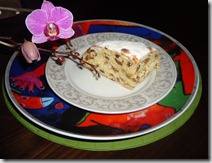 The grocery is selling vividly colored eggs and a wonderful spring fruit loaf  (fruitbrood) with spices and sugars.  I picked one up on a whim Friday and nibbled all weekend(picture, with my orchid that is blooming, above right).  The chocolate shops are, of course, in their best season, with filled eggs of all sorts on offer.  I chase after the dark (puur) chocolates instead of the white (wit) or milk (melk) ones, they are going for about 3 euro per 100g. 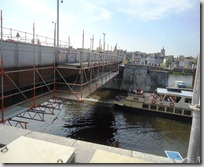 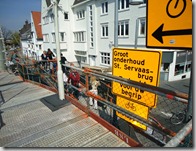 The Stone Bridge (Sint Servaas) is undergoing a six month renovation to fix it’s aging lift system.  They’ve locked the span into its open position and have built a series of bike ramps to accompany stairs up and over the work.  The ramps are off-limits to scooters but they cross anyway, scattering bikes and pedestrians.  Otherwise, it’s an orderly delay as everyone queues up to push bikes up and over – I’m almost convinced that it’s faster to go around the alternate near Markt Square.

Otherwise, sunny and warm all weekend; I’m catching up on work as the Limburg bicycle racers take over the city streets.  Back to England on Tuesday, doing as much Dutch as I can until then…

email
« Among friends
Launching into the week »
Radar Weather