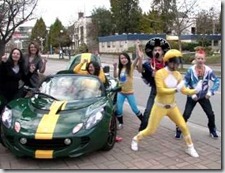 “The coolest thing I’ve ever seen,” exulted University of British Columbia students.  “Pretty close to flash mobs,” advised my ever-cool daughter, while the Independent labeled it  “A phenomenon”.

LipDub videos are now on the radar.

I’m a bit embarrassed that it took this long for me to catch up with the phrase, although I’d known the concept for years: Pick a song, then film a five-minute lip-sync video in one swooping take through mobs of students singing along.  The earlier versions that I knew of featured original works, I remember 2006’s “Cambridge Facebook Song” (referred to as “The Facebook” throughout, betraying it’s origins in pre-Sean Parker days).  Then there was the “That’s why I chose Yale” sing-a-thon last year (and the memorable Harvard response).

LipDub is now a almost a competitive inter-campus sport.  Students are picking up sponsorships, recruiting ever-larger squads of syncers and dancers, adding production tricks and  “Making of…” supplements.   “To get them right takes a level of planning, dedication and perfectionism that is probably only achievable by 20-year-olds looking for something to do instead of 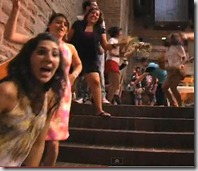 an 1,800-word essay on city planning,” is the Independent’s take, while other papers feature casting calls for ongoing projects.

It was a slow evening last night, and I ended up brewing a bit of tea and chaining through YouTube for a couple of hours before turning in.  Among the ‘best of breed’ I found:

2009 Universite Laval –  “Livin’ on a Prayer” – a surprisingly good narrative framework, and nice use of the school football players.

2009 Université du Québec à Montréal – “I Gotta Feeling” – lots of good individual performances and costumes give this more of a street festival feel.  Extra points for their “One year later” mashup of international press clippings.

2010 University of St. Andrews – You Get What You Give” – somewhat spare and restrained by current standards, but this gives the Highlanders effort some charm as well.  Probably the coldest setting; lots of mittens in evidence.

buildings and courtyards.  There is a lot of faceless concrete throughout the BU campus: I guess I got spoiled at Cambridge.

2010 Maastricht University School for Business and Economics – of course the Dutch do this too, and with a bit of zombie flair.  Nice for the familiar backgrounds and the inevitable musical choice of Queen.