‘Dropping back into town for meetings and the start for my inburgering.  The rain followed me over from England; the apartment building is filled with hammering and sawing as the new restaurant races towards completion downstairs.  It’s not the only change that I’ve noticed though: Maastricht is full of surprises.

The Drug Shops are becoming ever more restrictive, just as I was finally determining that I should figure out how they work. Recent news articles report that the the government is proposing new restrictions eliminating access for visitors and restricting access by residents.  Shops failing to meet minimum membership requirements (perhaps 1500 members) would be forced to close.

Maastricht has already moved to require proof of residency, and I’ve never had time nor inclination to visit one before they disappear.  Lately, it’s been embarrassing to admit to visitors that I have no clue how the boats and shops work, and friends have offered to give me a quick tour.  It’s one more nail sealing off any eventual run for public office in the US, I suppose, but if there are no pictures and I don’t inhale…? 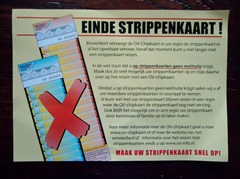 The venerable Strippenkart is on it’s last month in Maastricht, due to be phased out by July 1 in favor of electronic OV cards.  I’ll miss them: along with setting up a chip-knip and showing style with haring, they were an early expat success as I climbed into Dutch life.  It took effort to figure out where to buy them, how to use them, the zone system, and discounts.  Now the newcomers will just wave plastic.

And the Gemeente is deciding whether to allow a strip club and pole-dancing establishment to open four doors down from my apartment on Kesselskade.  The local bartenders and shopowners roll their eyes as we discuss it, saying that it’s not yet a done deal.  The street has been moving upscale over the last year, with lots of refurbished stores, new restaurants, live music, and, of course, the “Christmas on Kesselskade” winter festival.

On the one hand, it’s not someplace I’d go and I suppose I can take a live-and-let-live approach to the neighborhood.  After all, the brothel around the corner never makes any disturbances.  At the same time, I admit to wholly American stereotypes about the type of people who will be attracted to the place and the potential for more crime.  Besides, it’s going in within a couple of doors of a baby-clothes store – it all gets a bit surreal. 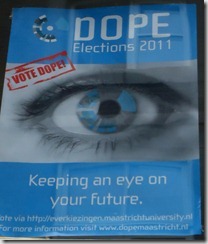