That number symbolizes the burden that Dutch taxpayers bear: it’s the marginal tax rate for annual income above 50,000 euros.  It’s Exhibit A for my American friends concerned about the Dead Hand of Government and Creeping Socialism.

However, he posted an interesting counter-analysis in his NY Times blog Economix last week, asking What benefits do Europeans get for their higher taxes?  Two big answers were direct subsidies for early child care (parental leave, wellness, and family allowances) and health insurance.  In fact, once the cost of health care as a percentage of GDP is added in, the resulting figures are much closer: 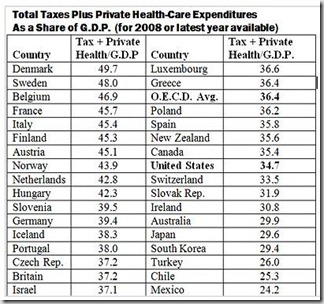 He’s a conservative, remember, yet he concludes

Middle-class Europeans get cash benefits from government that offset much of the tax burden in a way that the United States offers only for the poor. There may be reasons why it is better not to subsidize every family with children and not provide government health insurance for every citizen. But the idea that Europeans are enslaved by high taxes, as most American conservatives believe, is just nonsense.

I’ve got to applaud his intellectual honesty: if only the tea party folks could see as clearly.

Further, I have the 30% rule working for me in the Netherlands, where the first third of my income is free from all taxation.  I am taxed 25% on business profits (vs 35% in the US) and get VAT refunds as a small business.  In the end, I think I pay about 38% on my personal income in the Netherlands, less than I would in the US (and that is before I add in deductions in the US for Medicare and Social Security, which I don’t pay here).

The acid test is whether I owe a differential after taxes are computed against the same income in both the Netherlands and the US.  By the end of summer, I’ll know which way it flows: if I owe anything in the US, it’s because taxes are higher there.