Maastricht has been sweltering in tropical conditions for days, with temperatures over 30C (nearly 90F), humidity barely a breath of wind.  I’ve been managing the front and back windows trying to encourage a bit of cross-ventilation, but the heavy air only drifted into sodden piles between the rooms.

The college wasn’t much better, the tiled halls seemed to trap the heat.  The lessons revolved around a grocer fainting from a fever after ‘going postal’ and throwing lettuce at a pedestrian for shopping at another store.

I dutifully noted boos, koorts, and sla into my notebook.

Break time: students were torn between jumping out into the heat or staying in among the lessons.  I looked at the schoolyard, the fences, the regimented lifestyle, the wire in the windows, (the food), and counted the similarities between inburgering and prison.

The afternoon class was dedicated to finding a job.  Since vocabulary is still at the NT1 level, our coordinator broke it down into Dutch that we could understand:

Gardening was starting to look good. 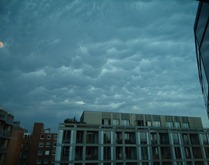 The sky was darkening as I pedaled back to the apartment; an occasional rumble of thunder growled from the south.  I beat the rain home, but strong winds flung open the windows as I arrived, toppling a desk and scattering papers.  The clouds had a oily, pouchy look that would have sent us towards the cellar back in the Midwest, but none of the swirls that suggested real trouble. 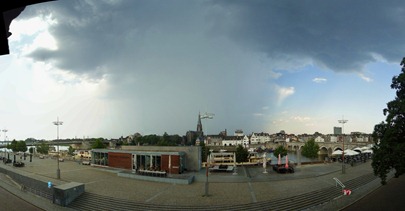 The wind, the rain, brought welcome relief.  The lightning flickered into the night, the rain beat on the windows, the temperatures dropped.  The world gradually tipped back to it’s proper axis.  I skimmed the Limburgs Dagblad, sipped a summer beer over salmon, and pleasantly surprised at how much more sense the paper was making after a few weeks of study.  Coffee shops were being closed a few blocks away and I understood why; camping gear was on sale and I knew where.