How do you know if an idea is any good? 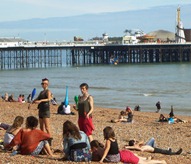 The real test for me is if the idea builds momentum the more time you spend with it. I’m a big believer that you have to spend a lot of time with an idea. Good ideas get stronger the more you work on them. You begin to lose interest in weak ideas.  Jake Winebaum

I’ve always subscribed to the notion that good ideas are generative – they create excitement and spawn more ideas.  Bad ideas, in contrast, become *work* – work to persuade people that they are correct, work to fix the problems that seem to come from them.

How crazy are people at the top?

Madness is a more powerful engine in society than rationality.  Capitalism, at its most ruthless, is a manifestation of psychopathy; while only one per cent of the population are psychopaths, four per cent of business leaders meet the criteria.  I went through the test with (executive Al Dunlap) and he confessed to a huge number of items, redefining them ‘business positives’.  Jon Ronson

Overall, while some leaders are motivated by altruism or vision, I think that a significant number are overcompensating for perceived flaws or slights, while others are simply self-serving (the best I can do, since DSM V is eliminating narcissism as a personality trait).  These people, to the extent that they gain power and followers, cause enormous collateral damage to careers, institutions, and society.

If you want to take the test, it’s here, and, as you work through it, for get the business leaders for a moment…what about the politicians?

How do we counter the Tea Party?

Far from being the respected ‘salt of the earth’ the working classes have been demonized as political and business leaders destroy industries, dismantle safety nets, break the unions, and foster grasping individualism in place of community values. We focus on a "kiss up, kick down" politics, in which ordinary people pay for the bankers’ crisis, while everyday being attacked across the media world.   The Independent

‘most often, by the conservative voices of the wealthy who co-opt the rhetoric of populism.  It started in the  Reagan / Thatcher Revolutions, pressing dual agendas of trickle-down economics and strident individualism against government institutions.  I keep thinking that the movements will run their course as the crippling economic flaws and deep social costs mount, but somehow the rhetoric keeps suppressing the facts.

I’m not sure how bad it will have to get before people, collectively realize it and act: journalist Johann Hari is a good tonic (How to build a left-wing Tea Party), based on an article in The Nation.