I wrapped up meetings in Cambridge and headed to the trains yesterday afternoon – it should have been a quick trip across, but I took a later Eurostar than normal and ended up in Brussels at 10:30.  So far, so good (there was a wonderful street fair surging around the station), but only slow trains were still running east to Liege.  That, in turn, deposited me 20 km short of Maastricht a half hour after the last train had left.  There wasn’t much to do but to hole up in a nearby hotel for the night – fortunately the dearly desk clerk only asked 2/3 the normal price, and threw in breakfast as an apology, saying that I wasn’t really using the room for very long.

I scrambled this morning to make the early train to Maastricht, arriving around the time that my language classes were to have started. 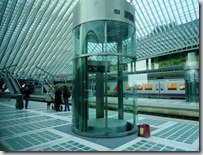 ‘Were to’: the college sent a letter advising me that they were taking a reduced-schedule break in August (not unexpected) and giving me a list of assignments to complete.

With the day rearranged (in my favor, for once), I wandered to the kitchen to make a bit of breakfast, only then finding that the gas had been shut off to the building.  Actually, it was wholly disconnected since the Tapas Bar downstairs doesn’t require it and the folks downstairs have moved out.  This not only takes down the cooktop but also the hot water, since the apartment has one of the flow-through water heaters.  My neighbor had already called the landlord’s son, though, and a small earthmover was in front of the door by noon, pulling up the bricks and moving the sand.

Still, it’s a nice summer day along the river, the streets filled with shoppers and the café’s open, so no complaint.  I’ll settle in to catch up with work and enjoy the churchbells.

email
« Back on the air
Are social networks good for patients? »
Radar Weather