Homes in the Pacific Northwest often have decks behind them, wooden platforms used for lounging and entertaining.   On sunny days they, mine is a favored spot for sitting in the sun and reading and enjoying the surrounding forest; on summer evenings, it’s a spot for dinner and conversation with friends.  I think that decks are mainly featured alongside wood houses in damp climates, where patios are impractical.

Unfortunately, decks accumulate dirt, moss, and mold.  After a couple of winters, the wood becomes dark and mottled and the whole surface becomes slick after rain and grey in sun.  Cleaning and staining the deck has to be done during warm months when you can be assured of several days of cool, dry weather.  It

usually means a day of pressure washing, a couple days of drying, and a day of staining and sealing the wood.

This time around, we wanted to avoid pressure washing, since it’s expensive and damages the wood.  The “This Old House” DIY video suggested using a biodegradable cleaner instead, characterizing the job as “Somewhat easy, the work is a bit tedious, but not all that difficult”. Great.  So we set to work yesterday with a hand sprayer, brush, a sponge, and determination.

One thing that the video missed is the need to clean out the pine needles and muck that builds up between the slats of the deck.  So, the first job is to take a knife and run it between the boards, lifting out the junk, then using a blower to get rid of the debris.  I call this ‘Flossing the Deck’, and it’s a hands-and-knees couple of hours for everyone,crawling along the slats and digging at stubborn clogs.

Once that was done, we started spraying on the cleaner.  I quickly learned that slower is better- waving the wand over the surface neither coats the wood completely or densely enough.  I also experimented with spreading the stuff using a sponge, but it cut the effectiveness significantly.  The best result was to slowly coat a three-by-three patch, wait 5 minutes, scrub it with a brush, then wash it off with water.  Blonde wood shone through like sun breaking between clouds (lower circle, above).

The difficulty is that decks are huge, and it takes a lot of 3×3 patches to cover the expanse.  Eight hours the first day; four the second before we had the entire deck was cleaned.

The constant rinsing also makes the moss slippery – I took a half dozen full-out flat-on-the-back falls.

I tried rubber-soled boat shoes but it made absolutely no difference .

Among other ingredients, the spray cleaner contains bleach, so my clothes suffered.  The jeans, in particular, look like a 60’s remnant, white tie-dye patterns scattered along the outside of both legs.

But now it’s all done and looks great.  The video recommends putting down an anti-fungal boric acid solution, but there’s not a store in town that sells the stuff in the quantities needed for any reasonable price.  So I think we go straight to a stain / varnish combination after the drying ends. 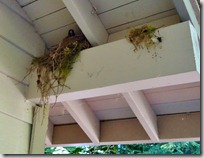 The whole process was watched over by a bird nesting under the eaves.  She stayed calm despite all of the thumping and spraying – I had to break from time to time to allow her to get in and out.

There is always a lot of work to do on the house when I’m back in the US, fixing appliances and cleaning the garage, restoring the deck or picking out flooring.  I’ve gotten most of the shopping done, picking up provisions for myself and my fellow expats, and have gotten around to most of the people that I needed to see while I was here.

Two days left: I’m behind on Dutch but keeping up with the businesses thanks to being awake early with jet lag.  Doing okay, although the muscle soreness is starting to settle in.  The (occasional) joys of (distant) home ownership…

email
« Fun on the 4th
Back on the air »
Radar Weather