It’s been years since I was in the US for the 4th of July, so it was fun to join in all of the traditional fun that accompanies the celebration.  Technically, it’s the nation’s birthday, pegged to the adoption of the Declaration of Independence in 1776, declaring the colonists independent of Britain.  A Scottish friend of mine questioned whether it was Britain or just England; a history teacher pointed out that the actual signing of the document wasn’t complete until August 4… whatever.  Since 1777, the day has been celebrated with special dinners, speeches, parades, troop reviews, fireworks, and red white and blue bunting.

In Washington State, picnics and fireworks predominate.  The local Safeway was filled with boxes of beer and steaks overflowing the meat counter; stacks of buns, chips, and condiments crowded the aisles.  Sousa marches played over the store’s speakers.  I remember this as a ‘family and friends’ holiday, a day in the sun to be lazy in the park or to play on the water.

We used to take a sailboat out from the Island Sailing Club where I was a member, cruising up Lake Washington to a secluded beach for a picnic, then back down to anchor off the 520 Bridge for the fireworks. 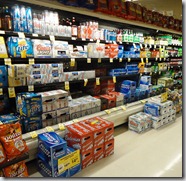 This year, we’re doing picnic and fireworks closer to home, though. My daughter brought her boyfriend by and I wet off to buy some fireworks from the local stand.  These offer ‘safe and sane’ fireworks, mostly small firecrackers, sparklers, and rockets, that complement the big artillery sold at Boom City up on the Tulalip Reservation.  I picked up a few favorites (Roman Candle, bees) and the Turtles and Jack-in-the-boxes that my daughter has always been fond of. 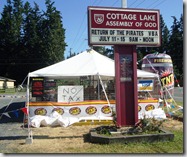 With the holiday set up, the afternoon passed preparing salads and kabobs, the evening competing with the neighbors setting off fireworks in the driveway.  The community events got rolling at about ten pm, large fireworks displays against symphony music in Bellevue and Seattle.  The smaller shows that Woodinville and Redmond used to have over the wineries have disappeared, victim of budget tightening and anti-fireworks activists.  But there were lots of neighborhood fireworks, rockets above the tall cedars in every color imaginable.

Someone asked how it compared to the Maastricht New Year celebration – our neighborhood 4th ended earlier and to had lots less fireworks overall.  The thick smoke that filled streets and squares in Maastricht was also missing.

Overall, a nice, relaxed holiday, a lot like I remember.  Now I just need a summer fair to complete the memory.

email
« On the (air)way west
Flossing the deck »
Radar Weather