I flew back to the US this weekend.  First a small Belgian train, then the Eurostar back from Brussels.  A  short night in a small Yotel pod (below) at Heathrow T4, followed by breakfast at the airline lounge and an early flight to New York.  There was a brief brush with Delta’s ground crew (We’re here to welcome all of our Diamond fliers – there were two of us, a little club) and with the NYC Border Police (I’m sorry sir, but those Limburg sausages will have to stay with us).  Finally, a long hop through choppy air over

Chicago and North Dakota, and into Seattle late Saturday night.

It’s nice to be back in the US for a few days, it will be interesting to be part of the 4th of July again.  I have a lists from expat friends of bits and bobs that they have depleted in their absences, so there will be some re-provisioning ahead of the return journey.  There will be business meetings to start a new venture in the SouthEast.

There will be, for the first time, my daughter with a boyfriend.  (Note to self: bring Cuban cigars, thick and smelly, for (variously) intimidation, test of wills, bonding). 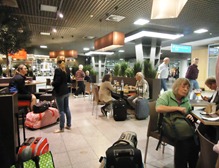 The various flights went smoothly; I wondered about people’s stories (you can never guess from appearances: try your luck on the tableaux, right) and flicked through the movie choices, looking for a trailer that resonated with my life.  I reformatted all of my 2011 financials for the accountants.

I talked about life in the fast lane with seatmates; one told me about a viral video of the difficulties in using bike lanes in the US.  Casey Neistat got fined $50 for riding outside of the marked bicycle lane in New York City: he filmed the encounter and produced a parody follow-up of trying to ride the within the lanes.

The Slate Culture Gabfest followed up with their thoughts on the video, thoughts that included sending all sanctimonious bike-riders back to Denmark where they came from.

What is it about Europe that they are more fascinated with past tenses than future ones?  (Cheap shot, I know).