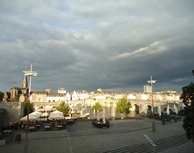 I headed back to Cambridge at the weekend, the balance of work shifted from one side of the Channel to the other, sloshing me out with the current.  August was arriving, ‘never a month for taking initiative in Europe.

Maastricht was pretty cold and rainy throughout the weeks; it felt like summer spent itself in May and there was going to be an early start to autumn.  The college suspended Dutch classes for the month of August, taking off the daily pressure of preparing for and attending classes.  The construction of the tapas restaurant downstairs has entered it’s final phase, with trucks dropping off serving pieces and food, wine glasses and espresso makers being unboxed, staff being trained.   The hammering starts earlier and ends later – the owner tells me that his official opening is next Wednesday if the permits arrive on time.

Cambridge had entered the slow-paced summer holidays.  The weather was hot and muggy, with thunderstorms rolling out of the east at sunset.  Cricket returned to the village Green, teams out in their starched whites, swatting and running while fans  clustered beneath the trees, idle through long afternoons.  The ice cream truck rolled into the lane alongside the field, announced its opening with a burst of bells.  There’s a brisk exchange of cones for pence, then the van scrambles off to the next field, the next village.

The folks who have the summer days best figured out live at the Cambridge Gliding Centre, out in the fields beyond Gransden.   The club has about 80 planes and a couple of hundred members; visitors are welcome at the airfield to watch the planes coming and going or to take a trial ride.  Gliders are beautiful constructions, reminding me of sailboats in the way they are designed to interact with the elements rather than just force themselves through it.  The owners are always willing to talk about their experiences and to show their planes, delicate constructions, with a bulbous cockpit, tapered fuselage, and long, thin wings. 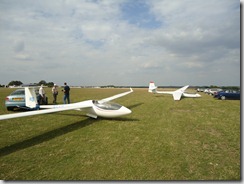 The planes are launched by winching them madly across the field using  quarter-mile cable attached to a tractor drum.  They arc steeply, silently, up into the summer sky, releasing the connection as they reach the top of the circle and banking off to find a willing updraft.  Five or six planes hover around the field  lazily circling in rising thermals, then dropping back down to land, rolling across the meadows on their single wheel.

It costs about £60 to take a flight, but nothing to watch.   I’m content to enjoy the slow ballet of the operations, the bird-like planes, the open quiet of the countryside on a warm summer day.