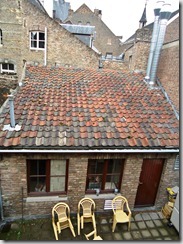 The Appartement-aan-de-Maas is busier than it used to be: pans clang through the afternoons and French drifts up through the courtyards.  The new Tapas restaurant on the ground level expanded their kitchen up into a laundry hut on the terrace.

Overall, it’s not a bad thing. It gives some life to the back of the building and staff is invariably polite when glimpsed catching a smoke outside the kitchen.  Tapas is neither smoky nor greasy (indeed, little cooking seems to happen, it’s more cutting and assembling), so there isn’t an assault of heat, noise, and smells from the restaurant.

Dutch flats are closer together than American apartment blocks, and tend to cluster irregularly around shared inner spaces with lots of windows all around rather than aligning in neat rows with windows front and back as was common in Chicago.  It leads to a lot of intimacy with the neighbors, a bit disconcerting when I first moved to Arnhem but scarcely noticed today.  People occasionally wave across windows but generally ignore one another, respectful and circumspect for the most part.

While the arrival of the kitchen has made the inner court busier, it hasn’t disturbed that ambience much.  It has, however, had a salutary effect on the pigeons.  The numbers are markedly down, and those that remain are scruffier and a bit dazed – maybe not getting the sleep they are used to with the cooks busy until midnight.

It’s also likely to have an impact on the Middle-eastern girls living downstairs.  They struggle with having me in the building, closing the door and turning the locks every time I come up the stairs.  I feel bad that I seem to scare them just by living here: what purpose is there to characterizing men generally in that way?

Now, the new tenants on the terrace are right outside their bedroom windows.  They’ve been on summer holiday, but return next week to discover the changes. I can’t imagine that they will keep to the Dutch custom of ignoring the neighbors: ‘more likely that they move within weeks.

It’s had a salutory effect on the pigeons

They keep to the usual custom of keeping a blind eye to the neighbors, so if don’t   each other’s households, and neighbors are generally respectful of the shared spaces and circumspect in attire.