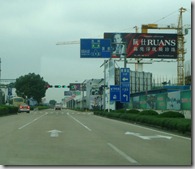 ‘on the ground in Hangzhou – warm and humid, but very green and friendly.  The taxi ride in from the airport, while dirt cheap, was reminiscent of my time in Korea – breakneck speeds, weaving and honking (the high point was trying to pass someone on the right where there was a turnout for the bus).  There were only quick glimpses of the city and countryside on the way to the hotel, but many differences, large and small, even to jet-lagged senses.

The hotel is lovely, with a vast wood-trimmed lobby, trimmed gardens, and ample bottled water (the cold taps are not treated). The Great Firewall blocks Facebook but not LinkedIn, allows MSNBC and BBC, passes nasty Rush Limbaugh but blocks my blog (!).  Blogger is bad, Flickr is okay; Google Translate is blocked, Babylon okay.  Mail doesn’t seem to be an issue, Skype is okay, but Twitter and my proxy server access is down.

Scooters are all electric; the air is much cleaner than I expected.  Odd, though, that they spend so much energy keeping the streets spotless but can’t spare a moment for a broken awning or crumbling mortar.  I’ve struggled with the ATM’s, the keys are backward from Western Europe (“1” at lower left rather than upper), so I enter the PIN wrong every time.  No problem with connections, though. 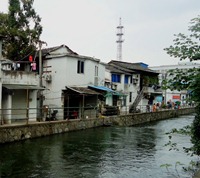 The Chinese seem to be in a frenzy of wedding photography around the city – everyone comments on it but nobody knows if it’s  fashion shoot or just that time of the season. Bicycles are fewer than scooters and they ride ‘Dutch style’. 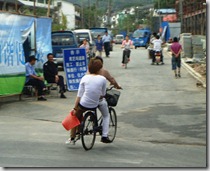 The University looks like almost any other except for the tell-tale bits of trim.  And the gigantic statue of the Chairman. 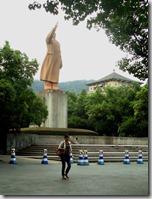 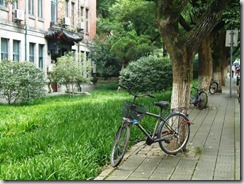 There were introductory conference lectures and a challenging climb up the hill behind the University – 790 steps to an outstanding view of the province, then down the stairs in late dusk to cherry wine and the welcoming banquet. 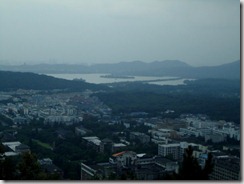