CamStent Ltd, an emerging medical materials company, has announced today the results from a study which demonstrate that the Company’s first product from its surface coating platform exerts strong antimicrobial effects against the organisms primarily responsible for hospital-acquired urinary-tract infections. The Company also announced that it has closed £350K ($570K) of seed funding from a consortium of business angels. The funding will be used to optimise the Company’s product for licensing and clinical use.  http://t.co/osDfDaI

This one is kind of a big deal, as my daughter says.

This is our first major press release as a company: it went worldwide and it was gratifying to see the twittersphere light up with the news after it went out on BusinessWire.  Behind the announcement is 18 months of hard work by our university researchers, endless pitches by Clare and I , support from financial and service folks, and valued cash and ideas from our 16 angel investors.  I can’t overestimate the importance of attaching the coating to silastic substrates, and of demonstrating an antimicrobial effect on the relevant protozoa.  We’ve got a lot of work ahead, but a solid base of knowledge and funding to work from. 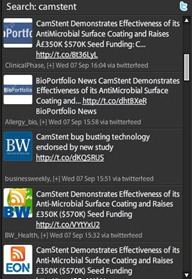 The press release took a month to finalize: this turns out to be one of those tasks that everyone feels competent to do.  And, when they all do, incompatible versions pile up and the whole exercise starts to circle.  I brought along a micro-business PR firm, Zyme Communications, and left it to Lorna, the professional objectivity helped and we got to a version that mostly everyone was mostly happy with.

The final, shipped version had one minor error, despite reviews and re-reviews.  Frustrating: it is really hard to achieve perfection, conveying the facts and being internally consistent.  In science, a bit of evidence that doesn’t fit a model generates new hypotheses.  Measurements are made, models are refined and knowledge revealed.  In procedural law (on television), that bit that doesn’t fit is the loose end that brings down the criminal.  Shows from Columbo to Suits challenge us to remember and

correlate the a body of facts to find the thing that doesn’t belong, the telltale that the detective never misses.

I think that we have become oversensitized to the value of these inconsistencies, though.  Approaching the anniversary of 9/11, it’s striking how imperfections have become cast as inaccuracies, then as ground for conspiracies.  From Lone Gunmen to Birthers, fact-finding commissions that fail to be complete or consistent feed speculation. Wikipedia even keeps a list.

I try to be complete: I really try to be both correct and consistent.  But efforts fall short of perfection (perhaps intentionally –  a subconscious Persian Flaw?).  But often it’s just a simple mistake rather than a ‘tell.

My investigator quietly pointed it out and we quickly corrected it without developing a conspiracy about how it slipped in there.

And, in the end, that let us all keep the focus where it belonged: celebrating the moment.