Back in the UK, with a backlog of Dutch things to talk about.  I think it’s going to be a week of nibble-posts while I tee up the pictures and stories.

I am glad to have gotten to London today to see the Joan Miro exhibit at the Tate Modern.  It features 150 works, arranged in chronologic order and grouped to reflect the main periods of his work. (there are a couple of similar chronologies available online).

Although there are a few sculptures on display, they aren’t really representative: I prefer the Miro Gardens at the Fondation Maeght above Nice or the Funcacio Joan Miro in Barcelona.  His work are colorful and playful: I like the bold blue fields and red accents in his paintings, the blobby bouncing creatures that fill his imagination.

The Tate exhibit emphasizes his political and surreal roots, though, leading viewers through the symbolism and emotion 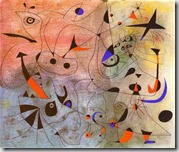 that they believe dominates the works.  Walking through the chronologic series of Constellation paintings, for example, the commentary described how one paintings reflected his tension, the next his relief; anger anger at a political development ahead of serenity on returning home.  The political emotion was lost on me, and I wonder if it wasn’t a rationalized narrative to like disparate doodles.

I wish that they would have taken up a narrative contrasting him with Kandinsky (Composition VII is shown above).  Superficially, they both look like collections of lines and circles.  But Miro had a much more obvious symbolism in his works.  The exhibit shows clearly how concrete, specific items became representations in later works: Catalonian caps, men, stars, women, ladders, each with a very specific meaning that was carried throughout his paintings.  Kandinsky evolved from concrete representations to an abstract language where the lines stood for minimalist elements of the scene rather than the meaning within objects. 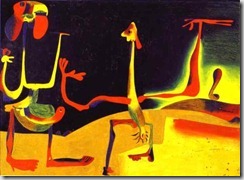 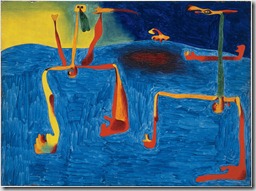 Once again, photography is not allowed in the exhibit – I think that’s a mistake when lots of people want to remember a favorite painting that they may never see again, and students arte studying and contrasting detail in the works.  My favorite three paintings, fortunately, were all available on the web: distorted men and women against surrealist landscapes (two philosophers 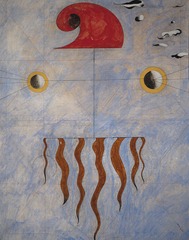 arguing in the blue one).  Their combination of fauve colors, symbolic appendages, and whimsical distortions captures Miro better for me that treatises about how his paintings were intended as sly jabs at Franco.

The exhibit is around for another week – 2-for-1 entry available from the National Rail site.