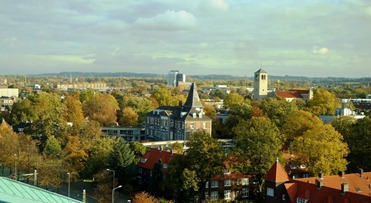 Its always a challenge coming back after a long stint traveling.  The mail is piled high, the ‘fridge is empty,  The bicycle could be anywhere: I’ve taken to writing the location on a slip of paper – fortunate this time around since the bike-park folks moved mine.  The leaves are starting to turn and the wind is blowing colder (although sun-worshipers, bundled in overcoats, are still filling cafes along the river).  The girls downstairs are back from their summer break; the tourist boats have shifted to a lighter schedule.

The first day is down to a routine, though.  Get the apartment opened back up, reboot the internet / TV, pick up perishables at Jumbo, find the urgent bits hidden in the junk mail.  Call a half-dozen friends,  get caught up on the local news (and gossip), swap the local credit and membership cards back into my wallet.

By noon, things are getting back to normal.

I find a letter from IND, Sept 29th, letting me know that two bits of information are missing from my residence permit renewal file.  Not unusual: their reporting rules constantly change, and business registration and 15% reserve  investment need to be formally confirmed this year.

‘could have been worse, there was an early suggestion that payroll tax payments and receipts would need to be documented every month.

However, they asked for a response within two weeks or they would review the incomplete file on October 28th. Since it’s already the 26th, this quickly rose to the status of Emergency.

Business registrations come rom the Kamer van Koophandel (KvK), which recently left Maastricht for Sittard.  Nothing to do but to hop the train north and walk to their offices to get the formally annotated registration document (uitreksel): two hours.

The 15% reserve rule requires showing that 15% of Stone Bridge’s capitalization amount, in my case 4500 euros, is present in the business bank account at ING.  Since banking reform hit the Netherlands, local branches can’t print and stamp balance statements: those have to come from Amsterdam and require weeks to process.  ‘best I can do it print the Internet Banking page and attach a lame letter saying that I hope this suffices: two hours.

A run to the TNT and it’s off to Zwolle.  This is why learning the language for permanent residency actually makes sense.

Arcus College writes to say that this is a holiday week, so all Dutch inburgering classes are cancelled. I’ve developed a knack for hitting town on holiday weeks, but it gives me time to catch up with the e-lessons.  I’m starting to feel the deadline looming, even though it’s a year away. 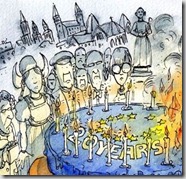 Still  things have settled down and look routine by twilight (5 pm), so I celebrate with a glass of wine and a back copy of the Economist.  The first article is an essay reflecting on how Maastricht, the birthplace of the euro, has become suspicious of Europe:

Surrounded by grand 17th-century painted-leather wall coverings, the mayor of Maastricht, Onno Hoes, is grappling with a problem: how to mark the anniversary of a treaty that put his city on the map, when the euro could yet break up? Indeed, how to celebrate European integration when the Netherlands itself seems so disenchanted with it? “There won’t be fireworks” but there could be an exhibition, says Mr Hoes, a euro-supporter. Or maybe Maastricht could reunite the euro’s founders “to tell us what they think, now that they are free to talk.”

‘nice to be back.

email
« Crossing the Channel
Back in my groove »
Radar Weather