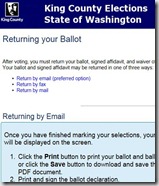 I’ve remained a registered voter in my native King Country, WA, following the instructions provided by Democrats Abroad when I first arrived as an absentee /expat . It really works well: I get notified of upcoming elections, review the on-line voter pamphlets, fill in an on-line ballot, then sign / scan / email to vote.  Makkelijk!

This year’s King County ballot has three initiatives, two resolutions,, and a dozen races ranging from judges and elections directors down to school board, fire, and water commissioners. ‘Twas time to settle in for an evening of long-distance research.

The hardest part is finding enough information about microscopically local races to make choices among candidates.  Maybe I’m over-sensitized by stories of stealth judges and school-board members with off-center agendas, but I really want to tick a box, not leave a blank, and to know what ticks inside the folks I’m ticking for.

The state guide covers the headline issues and county propositions, and I’ve always appreciated the way that Washington informs the voters. 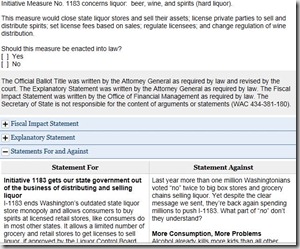 I never feel misled by double negatives or confused about the meaning of proposals in the guide, and can skim through this year’s transportation, caregiver certification, and liquor regulation proposals.  There’s an intriguing Senate resolution debating whether to use “extraordinary revenue spikes” to top off the state’s rainy day fund rather than to spend on new temporary services – that probably took the most thought.

The lower-level races didn’t have any obvious lunatics among the candidates, and I hate to just apply a simple rule (“vote against the incumbent”) – that’s not much better than picking the first name.  So, time do dig down.  Two good sources turned up. 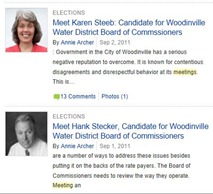 The Bothell Reporter had a pretty good set of interviews with the school board candidates, the objective and subjective, soft and hard, philosophies shake out fairly quickly.

The Woodinville Patch was even better, featuring a series of “Meet the candidate” profiles that really illuminated the candidates and issues.  I especially liked the Comments sections that followed – at best they allowed some give and take between candidates and their opponents that highlighted key issues and positions.  (Building the Brightwater sewage treatment plant was controversial ten years ago: it still is….)

I wrote to the Patch’s editor to say how helpful the series had been, she turns out to have Dutch connections (doesn’t everyone?) and a nice touch with the language.  It’s really nice (and reassuring) to find people committed to creating high-quality local content at a time when we are all worried about the death of big-city newspapers.

email
« Back in my groove
Once around the Albert »
Radar Weather