Some of the least obvious things about China emerged when dealing with the most commonplace of activities: finding a drink of water.

The .purification and delivery systems for municipal water have not evolved to the point where it  is safe to drink tap water – about a third of our travel group found out the hard way by getting intestinal disorders during the first couple of days.  Hotels make a point of offering bottled water (with very firmly sealed caps) and insisting

that you use it, even when brushing your teeth.  Restaurants place a beaker of boiling water at the center of the table with a bowl for everyone to wash their glasses and utensils before eating.  At the tea house, it all looked like an elaborate ritual, but we learned quickly that there is a “do-as-I–do” purpose behind it.

Water is, in fact, more expensive than beer in most restaurants.  Waitresses presented beer before lunch and dinner, tepid and weak, lightly carbonated.  We tried a few different varieties and none had much kick (spoiled by the Belgian Bush biers, I guess).

One appealing variation was the tea ball: a tightly coiled pellet of leaves that was popped into boiling water and left to steep.  In a few minutes, the leaves would unfold into a lovely flower, sometimes scented or spiced, that was saved and re-used.

The balls could be bought in markets for about Y6 each, expensive compared to loose-leaf tea.

We visited a tea plantation during the scientific conference: I wouldn’t have guessed that the green bushes lined in neat rows were actually tea plants.  They don’t smell or look anything like tea.  But we went to work with fingers and basket, instructed to pick only the young green leaves off the top of the plants.  A half hour produced a half-basket of leaves (none of us have much potential as tea-pickers), which were taken to a processing house for women to turn by hand in hot metal bowls to dry.  They mix in a bit of waxy oil as they go, and after about 15 minutes the leaves turn brown, fragrant, and wholly recognizable as tea. 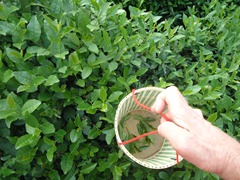 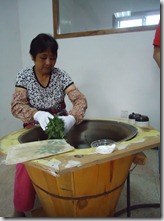 Like any expat, confidence comes from mastering the sample tasks in life, perhaps in remastering familiar routines in local settings.  Within a few days it was second nature to be passing and swirling boiling water ahead of meals, scarcely interrupting conversation for washing and brewing.

Now, back in the UK, I find myself hesitating, reaching for my bottle when I pick up my toothbrush.  It takes an effort of will to trust the taps again, a funny twitch after taking clean water for granted forever.