I really looked forward to the variety of foods and cooking styles that we would experience among the Chinese, and every meal was both a treat and an adventure.  Western-style food is certainly available (KFC, in particular, seems to be on every street corner), but I plunged in to the full variety of local tastes on offer.  For every bad experience with a thousand year old egg, there were dozens of good ones, nothing like the pale imitations in ethnic  restaurants mimicking the styles in Europe and the US.

Breakfast generally was a choice of rice or noodles, a watery rice porridge, fresh fruits and stir-fried vegetables, cushiony dumplings and strong coffee fit for the Dutch.  The bacon was horrible; chicken sausage palatable, and cooked eggs marginal – far better to follow the host’s lead and have less English-style fare.

Lunch and dinner were pretty indistinguishable – seating for ten around a large glass lazy-susan where a rapid sequence of dishes were placed. 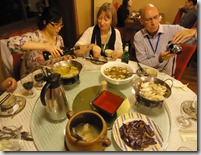 Everyone mastered the technique of slowly rotating to sample everything (and of trusting that everyone would take a small enough portion that each dish made it all the way around).  Rice and cooked vegetables were constant, but the meats and fishes came in endless variety.  Requests for something spicy tended to produce a mixed platter of green and red chilies rather than something Szechuan; watermelon and cantaloupe were the staple for dessert.

And we learned not to spin things too fast lest we knock over the beers.

Occasional treats like hot pots or snails were a nice variation, and there were clear regional differences as we traveled. Street food was another matter – a lot of cooking is done in the open air with meat and vegetables cut alongside grills and pots.   It’s hard to feel confident in ordering. 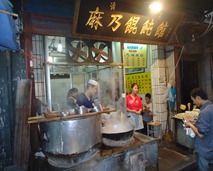 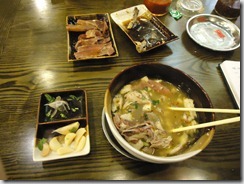 Stepping out into unchaperoned settings was an adventure – at one point we were handed a bowl, a plate of cooked chicken and beef, and a round crust of bread before being guided to a table.  We sat expectantly. Patiently. uneasily.  Finally a Chinese girl stopped to tell us that one breaks the bread into the bowl, calls the waitress who fills it with broth, then mixes in the chicken and beef.  It was delightful – the bread forms a bit of a dumpling and the noodles were fantastic.  But we’d still be sitting there if not for the the unsolicited advice.

Then there was snake.

The proprietor brought a yellow snake to the table and showed it off before cutting the head with a large scissors.  He drained the blood into a glass or rice wine, then disappeared to cook the remains.  The two parts were separated for cooking: we agreed that the chewy and flavorful skin was preferable to the crunchy bones and flakes of meat that made up the body segments.

And the blood-red rice wine?  ‘Really just tasted like vodka. 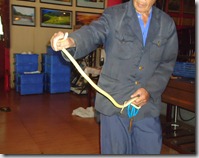 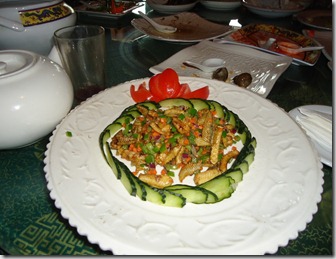