A basic function of government is to establish physical and organizational structures and services, infrastructures, that support economic activity and enhance living conditions.  In the US, for example, roads and bridges, military, transit, and emergency services are government’s responsibility.  Museums, libraries, and education invite more debate, while housing, telecommunications, and healthcare services are private undertakings.  Most European countries favor a different mix, with government playing a greater role.

Economic austerity and conservative politics are pushing public services towards privatization in the West, but market-driven firms cannot take the risks of developing large infrastructure projects for minimal returns. High-speed rail, alternative energy, and low-income housing, three obvious examples, have been waiting for private solutions for decades, but are still mired in debates about ROI and public guarantees.

Not so in China.

There is infrastructure being built everywhere.  Some of it, subways, trains, airports, and parks, fresh, new, and enviably effective.  Others, gigantic blocks of public housing, wide boulevards miles from any structures, and blighted riverbanks through industrial areas, are incomprehensible, both in scale and number.  Intent on achieving double-digit economic growth and supplied with limitless people to apply to projects, China has to be one of the most effective engines for infrastructure creation that I’ve ever seen.

Everywhere, officials talk with pride of the 10-year miracle of China’s economic development; everywhere, city people talk in bewilderment how their villages have gown 10-fold, 100-fold, in size and population over the same period.  Cities that would rank in the top-four in the Western world for size and density are a normal part of the Chinese landscape; public spending that would choke US taxpayers is simply routine. 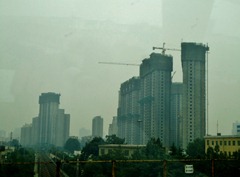 For all the good that these structures and services do in enhancing social quality of life and economic activity, they also carry costs.  Environmental and health degradation don’t seem part of the equation.  Once created, there seems to be little ongoing maintenance.  China Daily voiced other concerns as well

Under the current performance assessment system, which puts a premium on GDP growth, local governments have shown greater interest in infrastructure projects than medical care, education or pensions. A new infrastructure network is believed to give regions a more modern image and enhance local GDP figures.

Then there is corruption. It is common to see media reports of official graft involving bids, contracts, construction and supervision.

It’s pleasantly surprising to see this debated openly in Chinese media, and I did enjoy the ‘See, it really works!” moments along rails and highways.  How did the benefits of fast and cheap transportation get so lost among Western legislators, intent on promoting market-based solutions?

And, for China, it will be interesting to see how the balance between individual and social benefits shifts in future projects, or whether they can continue to invest at these levels once GDP growth slows below 5%.