China is free-market capitalism on steroids at the street level.  From tourist bazaars to night markets, on the paths to mountaintops or descending into caves, there is always someone trying to sell something, hammering at an oversized calculator to haggle the price.  It takes some practice and confidence to plunge into the give-and-take, not to be shaken by the doe-eyed pleadings and protests, and to get what I want at a fair price.  But it’s also a fair bit of fun once I got the hang of it.

First, it’s impossible to know the true quality or value of anything sold China.  The department stores will likely give the best assurance (silk is not nylon; jade is not plastic) and prices will fall somewhere between airport rip-off and street-level uncertainty. 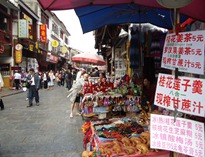 The clerks I met spoke little or no English though (nor should they, really), so patience and a pad of paper to draw pictures and numbers is helpful.

Once on the street, I tended to look for the self-evident goods:  A t-shirt is a t-shirt, a woven bag is a woven bag. There’s not much more to it than meets the eye and a reasonable check can assure that the stitching is firm.  I picked up small souvenirs that are light and characteristic of the area – I avoided any endangered and protected materials like woods, insects, or horn.

When I asked for a price, I’d usually get an outrageous quote, good for a smile together and a shake of the head.  The vendor immediately produced a huge calculator and started hammering in figures: generally my first response would be 20-25% of the asking price.

As time went on, I’d learn what others paid for similar items and could go a few yuan under that figure.  T-shirts are quoted at Y130, for example, but I’d come back at Y40, knowing that friends settled at Y45-50.   The seller would groan and  hammer down to Y90.  I would come up to Y50, they would say No Way, and I’d start to leave.  More often than not, they chase me back saying Okay Okay, and the deal is done at Y50.  If they don’t chase me, it’s over, I’d note the limit and try again at the next shop for the same item, a bit wiser.

But never, ever, pay the asking price, or even half.  We went ‘behind the curtain’ in a handbag shop (actually, a mirrored door) to look at the real designer handbags, suitcases,  and watches. 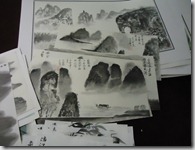 This is a notoriously difficult purchase – if you are lucky, it actually is leather, will last a few flights, or might keep time for several months.  But it isn’t what it says on the face, so Y1200 is a non-starter – people typically got down to Y250 or 300.  Negotiations go better if there is nobody else around: no vendor wants to drop a price dramatically in front of a crowd.  This was particularly true for art sales. 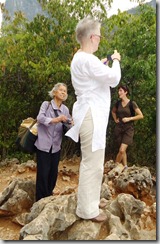 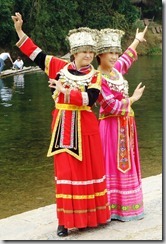 Services are difficult too: people chase us up mountain paths, fanning us along the way and offering water.  At the top, they demand money: I would give Y10, but they would want Y20.  It’s not a negotiation: I stopped carrying much cash, then if 10 is what I have, take it or leave it.  Same thing at any scenic spot: people are hawking pictures posed with cormorants, dress-up pictures  in emperor’s clothes, tours of the sites. 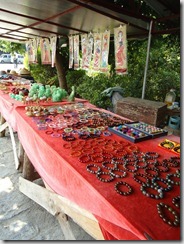 If you want it, negotiate the Y5 to Y20 price for it, but don’t let someone thrust something into your hand and snap a picture.

Virtually all of the people selling things were friendly, pleasant, chatty, and took ‘no’ for an answer if I meant it.  If they weren’t, then I left: people seldom grabbed at a sleeve to stop me.  So the experiences weren’t overwhelming or hostile.  And I felt like I got good deals (and good stories) on things that I wanted for people.

And the ‘fair price’?  If I got what I wanted at a price that was competitive with what others were paying, it didn’t matter if it was the lowest price possible.  I came away happy.