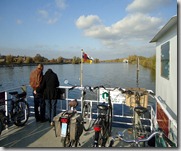 Il Fiore, my local gym, closed early this afternoon.  A moment’s frustration, followed by the happy realization that the sun was out, the breeze was warm, and the road lay open to the south.

‘time for the Albert Loop.

It’s one of my favorite rides, south along the Maas to Eijsden, then a ferry crossing into Belgium (in reality, a tiny bike-platform of a ferry, shown above).  Up the hill, over the bridge, and down to the locks (under construction – looks like a third passage is being dredged?).  Around the dam to the left, right turn, and onto the gently curving bike path that lines the blue waterway. 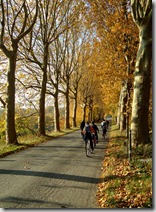 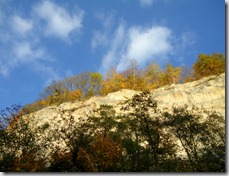 The Albert Canal is a bypass for barges circling Maastricht, cut deep through the hills in a broad semicircle through Belgium.  Normally I turn off at Kanne, taking the scenic route past Chateau Neercanne.  But the weather was warm and the path empty – how far does the Albert Canal go?

if it starts three miles from town and follows a circumference,  it’s about a ten mile path.

‘ lined with flaming trees and capped by soaring bridges, it’s a scenic run but not a well-traveled one.  For long stretches there was nobody in sight, then I’d find a cluster of anglers and birds competing for fish (neither seeming to have much luck). 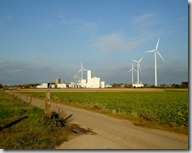 The adjacent village of Smeermaas is known for its churches, cormorants, and bike trails.  But, with taverns and shops shuttered for Sunday afternoon, I found more in the  bucolic fields and cows that ring the town.

It’s a quick run back into Maastricht from the north, completing a 2.5-hour loop in total.  I’m not sure that there’s enough in the northern reaches of the Canal  to recommend it over the route in from Kanne.  But it was a perfect day for exploring, and opened a few new areas for future rides to the northwest beyond the river.