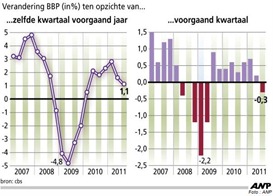 I stopped into a pub to sample some Bok bier and catch up with the news after a long day’s train ride.  I picked up The Volkskrant, a center-left paper, to find the front page full of graphs with all of the indicators pointing down. “Consumption falls, recession looms!”  The Telegraaf (center-right, above) and FD were the same: the world’s troubles had finally arrived at Dutch doorsteps.

I’ve previously written that the Dutch have done an amazingly good job over the past two years of tacking through the swirl of global economic riptides.  GDP was growing at 1.7%, unemployment hovered around 5.5%, the current-account balance was broadly positive.  But this was a big change: “The Dutch economy shrank in the 3rd quarter, the only one of the five largest Eurozone economies to do so. A combination of government cuts and falling consumption caused the economy to shrink by 0.3 percent compared to the preceding quarter…” (Volkskrant)

It may be a relative thing, a long run of good news followed by a quarter of bad, but it’s a surprising change.  People I talked with blamed it on bank layoffs driven by weak mortgage lending.  If so, it may be a one-time event before government activism and Dutch optimism re-asserts itself.

National statistics are kept by the CBS (Centraal Bureau voor de Statistiek) and their report (good practice in Dutch) can be found here.

It will be worth watching how changes in the economy drive changes in tax policies.  Another negative sign was an alert from my accountants about upcoming changes to the 30% Tax Ruling.  This is an expatriate tax break that allows expatriate employees to earn up to 30% of their compensation tax free for ten years.  In a country with 52% marginal tax rates, this is a huge deal.

The rules are being tightened, and this will affect knowledge workers and graduate students directly.  Expatica summarizes the rule changes; most accountants are being proactive in issuing advice.  The government will check that eligibility conditions are being met (that the employee or researcher has been recruited from abroad and meets salary conditions) and may, in some cases, reduce the duration of the discount.

If you already have, or were planning to apply, for the 30% exemptions, find out what the changes mean to you: this will have a big impact on expat living costs.