The week ahead was beginning to fill with UK-based meetings and most matters Dutch had been settled – it was time to hop back across the Channel to Cambridge.  Ryanair  offered fares that were half the going rate on Eurostar (43€ vs. 80€), so I booked my seat…well, a slot… and packed my 10 kg/single bag to head north.

Uneventful hour up to Eindhoven Airport, the trains were on time (even if the do divert to Heerlen ahead of Sittard on Sundays, adding half an hour to the journey) and the airport bus was running regularly.  The Big Board showed only one cancelled flight to London City,  a localized weather problem.  No worries; I settled in.

The call came to passport control, where the officer dug into the 5-month delay with IND (now approved, dank u wel) as the grumbling line swelled behind me.  A brief wait, a boarding call, and we walked out into the gathering dusk,

and the pea-soup fog.

No planes on the tarmac; ground crews settled on silent tugs and luggage tractors.  Not good.  We were diverted through baggage claim and back into the main terminal to wait for bus transportation to an alternate airport. 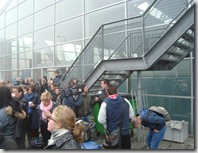 A quick check confirmed the Ryanair got caught by surprise and it was at least two hours before busses could arrive.

After the mess with the volcanic ash 18 months ago, Ryanair has become more attentive to European Regulation 261/2004(8)  – they even hand a copy to every passenger- and the deal is clear: U kunt de vlucht omboeken of restitutie vragen …er bestaat ook een mogelijkheid de vlucht om te boeken in de terminal.

Cool.  I jumped onto the Viggo Servicedesk to see if there was an alternate, and they swiftly booked me onto the 9:30 flight the next morning.

No fees; no hassle – it was a whole new Ryanair experience.

I unwound the journey and got a good night’s sleep, printed my new boarding pass, and headed back north at 7 am.

and back into pea-soup fog.

There was no fighting it: I joined the refugees boarding waiting buses and headed to Dusseldorf – Weeze.  The local television 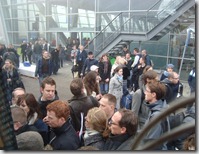 station sent a camera crew to take pictures as we shivered in the fog.  It’s an hour-and-a-half journey to Germany, I dozed and listened to the back catalog of BBC4’s Analysis (iPlayer or download: seriously the best half-hour on radio if you want to understand contemporary social and economic issues).  They dumped us off of the buses and through security onto the planes within 30 minutes of arrival, I suspect there must have been folks left behind looking for food or duty-free gifts.

All in all, a delay of 18 hours and 20 euro additional train/bus expense.  But the new policy gives choices when the weather gets bad: no-fee refund or switch, take the bus when it suits, and expedited handling in Germany.

‘Lots better than it’s been, but it may still be a better idea to take the train if temperatures are likely to drop during high humidity.