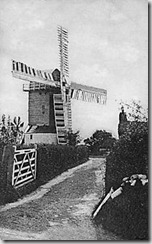 There’s not a lot to do on the train to Dusseldorf: I could try to catch up with email or read a book but the scenery and the swaying  make it better for listing to a podcast.  I happened onto Rethinking the Sixties from PRI, remembering figures like Hayden and Dylan who defined the decade for a generation in the US.

I was slightly young for it, I entered high school in 1968; I watched the riots at the Democratic convention on my grandmothers television while on holiday in Ohio.  The music, the war, the protests were things that the older kids did, things that we would do when we were in college.  Of course, in 1972 it was largely over: I got my draft lottery number (over 300) even as the war was ending.

Not really that long ago: it feels like yesterday.

Only it was fifty years ago.

I paused to get my thoughts around that fact.  Think about it: today, we are as far removed from the 60’s as people of that time were from 1912.  T 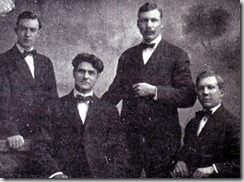 hat is an absolutely stunning idea: in 1912, the Titanic sailed from Southampton,  Woodrow Wilson became president,  Amundson became the first person to reach the South Pole.  The Beaumont Hotel opened in Maastricht in 1912.  In the intervening fifty years there would be two world wars, a Great Depression, a revolution in Physics, the arrival of business and transportation and communication technologies that were unimagined at the start of the century.

It doesn’t feel like it.  Nothing feels unfamiliar, only more evolved.  I had access to a computer in high school (granted, there was only one computer for the whole school), color television had arrived, we shopped in food stores, cars weren’t 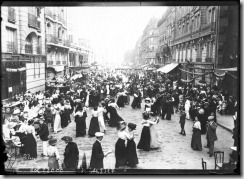 too different, my father went to the office much as people do today.  Some things feel qualitatively different: internet access to goods, knowledge, and people, wide social equality among genders and ethnicities, a lot more ethic restaurants that truly reflect their origins. The Port Huron Statement that captured 60’s youth politics feels out of time now.  But there isn’t anything that feels different on the scale of change, on the magnitude of events, that filled 1912 to 1962.

My grandfather was just a boy in 1912, I wonder how he would compare the two periods.   Was there less change after the 60s, or do I just have less perception of it?   By assimilation, accommodation, figuring out what to adopt, and where things fit in life,

everything from cell phones to mission statements emerged and then became everyday-ordinary to us.  A digital camera, a blog:  who can say what looks antique from my children’s perspective, or revolutionary from my father’s.

50 years.  Strange how I really don’t feel it: how recognizable old friends still are and how relevant the knowledge from high school still seems.

It seems like it should feel a lot more…different, doesn’t it?