Before I became an expat, I was a research director with Physio-Control, a Redmond WA company, the world leader in resuscitation techno0logy.  It was a great job, we had 20 talented people, a $3 million annual budget, and a dozen projects and studies ongoing that each had potential to directly save lives.  It was a great job.

At the time, though, I didn’t pay enough attention to the context of the job.  I was good at managing projects and people but missed the context of my department: someone was paying the bills and expected something in return.  I thought that performance alone mad us immune to budget cuts and office politics; I was wrong.

I met the current research director for dinner shortly after I returned to Seattle this week, and we talked about managing scientists and expectations. 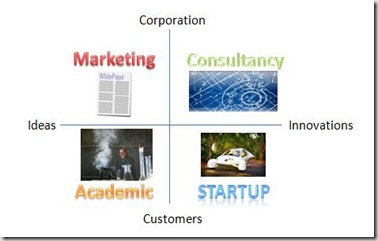 It seems to me that there are two dimensions involved:  the balance between creating insight and technologies (ideas vs. innovations) and the balance between internal and external focus (on Customers or on the Corporation).  In classic b-school partitioning, this creates four styles of research management.

For those with an idea orientation, research produces some combination of white papers for the marketing folks, bolstering the company’s offerings through focused studies, or conducting blue-sky investigations alongside (or in place of) university labs.

If innovation is more the style, then you create some combination of components for project teams or try to start entirely new businesses.

Intrinsically, all are valid: I leaned towards creating startups, the current director is a solid idea guy: both work.

But politically, the department can’t survive if the model doesn’t align with senior management’s conception of what research is for.

Despite lip service about organic growth and open innovation, the company didn’t really want an intrapreneurial group challenging established projects.  In the end, I was out and the group was disbanded in favor of a more consultative model.  The current director plans the politics better than I ever did, and the group; has greater stability and is able to take on longer-term projects.

It’s not just about positioning and performance.  Awareness and alignment also matter.

email
« Work-Life Balance
On the move at Christmas »
Radar Weather