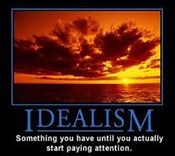 I called a friend “Idealistic” today.  I meant it as a compliment; he took it worse.  It seems odd.

Idealistic, for me, meant that he had vision for a better way of doing things and a passion for making it happen.  I knew a research manager who carried a brick around for a year, saying that a defibrillator should never be any larger than that.  He built a working defibrillator out of watch batteries once to show it could be done.  A very tall stack of batteries, to be sure.  I’m not sure how to describe someone like that other than idealistic – a characteristic we admired around the research table.

I consulted the authorities. Someone guided more by ideals than by practical considerations, declares one dictionary.  Thinking of things as ideal forms rather than as they really are, accuses another.  Having high ideals that are usually unrealizable or at odds with practical life, sniffs a third.

I see the point.  But if not an idealist, what?  Some of the most delightful people I know are people who don’t believe their ideas are impossible.  More than dreamers, they go on to demonstrate that they are right.

I find this delightful.  6.3 million Americans are studying or working abroad, the highest number ever.  Over 5% of all Americans 25 to 34 are actively planning to relocate outside of the US; 40% of those 18-24 express an interest.

Reasons vary, but “There’s a feeling among more entrepreneurial Americans that if you really want to get anything done, you have to get out of country.”

It wasn’t always that way.  In the 80’s, Europe was conservative and traditional, suspicious of innovation and hostile to invention.  I remember bringing a new brainmapping device over to show to British colleagues.  “How have you calibrated it?”, they sniffed.  The Japanese, meanwhile, took turns hooking one another up and joined in speculation about what the images might mean.

Now the situation is reversed.  There is a lot of creative technical talent to hire and strong university research centers to collaborate with.  Clinical studies are easier to do; regulatory hurdles are lower: I can get innovation to patients faster and cheaper than in the US.  The EU is a common market with as many consumers as the United States: the spending isn’t as high, but opportunities have been growing.  I feel like I can get more done here, despite the euro-crisis.

I’m happy with my choices and the opportunities that they’ve provided; others are discovering the same differences.  I suppose that the main question remaining is What is the best country to relocate to (probably varies by age and profession)?

email
« And on the boat back…
Work-Life Balance »
Radar Weather