And on those occasions that I look to see what’s cooking on my Twitter-feed from Dutch Daily News, it’s looking bad:

And the Netherlands is one of the bright spots in Europe just now.

A colleague of mine who specializes in creating computer models of complex systems released a new analysis of the world economy this week. He forecasts that the EU will break up in Q3 2013, while the US economy, “its structure weak and unable to absorb any increase in uncertainty or inefficiency”, will hold on only until 2018. 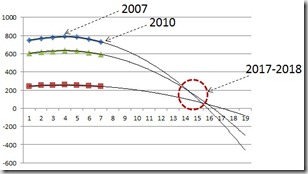 Similarly this week, a writer for the Times Higher Education magazine echoed the concern, suggesting that western economies are  facing a fundamental realignment:

All mighty historical upheavals are crises of belief and ideas. The present splitting open of neoliberal capitalism is no exception. What happens when an economic system and its political order reach their terminus is that governments will try anything, at whatever human cost, to retain the old system, fighting to the end and at other people’s expense to retrieve a familiar world.

I’m afraid that I’m still in the optimist’s camp, though.

I see growing technology and knowledge as the fuel for vigorous innovation, enabling products and enterprises to emerge from vision, hard work, and execution, There are scores of talented people who can be fit together to staff projects; opportunities for any entrepreneur to win big through through insight, luck, and persistence.

I attended a talk given by Björgólfur Thor Björgólfsson at the MIT Enterprise Forum in London this week.  Thor, a billionaire investor who was leading two of Iceland’s leading banks during the run-up to their 2008 collapse, spoke on Entrepreneurship in Challenging Times, and he was similarly optimistic.  You spot opportunities, take risks, build companies, exit, move on.  Sometimes you lose, but then you dust off and, again, push on to the next opportunity.  Overall, listen to your intuition and not to believe your own hype.

Good, but not enough, I was thinking between the lines of his talk.

He assumed that success in one area (his self-professed love of building factories) translated directly to another (banking).  But skills don’t leverage laterally, across domains, only radially within them.  In his case, both charismatic and successful, wealth brought hubris.  He did not have, and still does not have, and sense of his limits.

His immense wealth enabled him to gain immediate control of companies without any understanding of their business.  “Banks made money; banks were safe.  How could I go wrong?”  He admitted to feeling like it was all moving too fast, but “the smart people seemed to know what they were doing.”  He forgot that these are also people who want to please him, and perhaps catch crumbs from his table.

We’re in the middle of fundraising for CamStent now, and a big part of the process is engagement with investors.  They are rightly critical, challenging our assumptions, analyzing risks, and finding flaws in people and projections.  The tempering has made our processes stronger, and it’s a step that I think Thor, self-financed, never had to take.

What if large acquisitions could be vetted just like large mergers already are.  Maybe there should be oversight able to ask the basics: Can the buyer run the company competently; Do their plans make sense; Are there risks that extend beyond the company; Will their actions threaten customers or employees.

Perhaps buyers should be allowed only provisional control until they demonstrate their abilities; maybe they need to carry insurance or hold assets against unanticipated costs imposed on customers and employees.

‘Back to creating pitch slides…