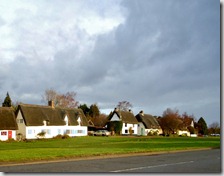 Its turned a bit wintry in the Village, no snow, but spitting rain and biting wind.  A good opportunity to pull out a summer recipe and imagine the warm times to come.

I decided to make a Key Lime Pie, pretty straightforward but impressive for the neighbors who don’t get many American desserts (I do try to explain that this isn’t a “pudding”, but they insist).

I thumbed through a bunch of recipes before settling on one from the Joy of Baking, with accompanying video. 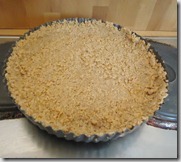 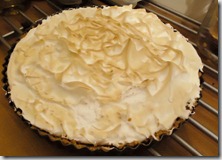 The base is a graham-cracker crumb crust.  Problem 1: no graham crackers in the UK.  Digestive biscuits are an okay alternative; add a bit of sugar.  So, process a package of biscuits, mix with about 200g butter and a little salt and sugar until the mixture holds shape in your hand.  Press into the pie tin and back at 170C for 10 minutes to harden.

The filling is made with 3 egg yolks (beat 5 minutes), a can of sweetened condensed milk (beat together 3 minutes), and a half cup fresh lime juice (beat together 10 minutes).  The video advises getting 20 small limes to make 1/2 cup juice.  I seriously mis-overestimated “small”, it took six limes to get the juice and zest.  I now have enough limes for a winter of gin-and-tonic. 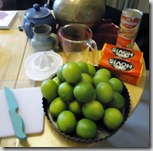 The resulting batter is yellowish, not green, with flecks of zest scattered like peppercorns throughout.  Mine didn’t taste quite tart enough, so I think the next round I might do a touch less milk (or use unsweetened and add the sugar myself) and a touch more lime juice.  Fill the crust, bake for 10 minutes at 170C and refrigerate for a couple of hours.

I wanted a meringue topping instead of a heavy cream one, so used a different recipe from Lifetips.  Meringues come in three types: a Swiss one is really creamy and thick and gives a nice layer, it also browns well under a broiler.  I mixed the 3/4 cup sugar, three egg whites, and a pinch of cream of tartar together, 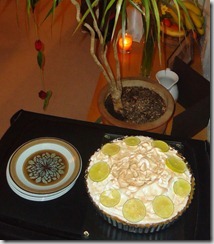 then lightly warmed it over simmering water, stirring, to dissolve the sugar.  Then whip it to death until it forms stiff peaks.  Spread it over the firmed filling and brown quickly under a broiler.

I garnished with a few lime slices (still 20 limes to go) and it looked great.  It came out of the fluted tart tin more easily than I thought it might and the crust and filling have stayed set at room temperature.

I’m tempted to use ramekins next time: the tart pan just isn’t deep enough to hold more than an inch of filling which makes the pie thin by US standards.  But it’s easy and worked the first time and (with a few gin and tonics) is, indeed, evocative of the tropics in winter.